For use in Photoshop, I’m looking for a font that’s exactly 5 px high but still readable. I tried some system fonts myself like Arial, Tahoma, Segoe UI but it all results in a pixely mess. 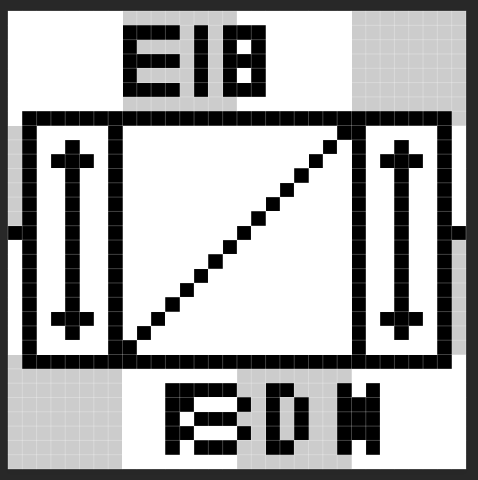 This specifically needs to be 5px. So Which typeface is suitable for marking of wires? doesn’t answer my question

If the 5×5 pixel font suggested by Cai and mayersdesign is still too large, you could try the 4×5 pixel font I made a few years ago for a challenge on another SE site.

The original version included only the letters A to Z and the . and ! characters, but I just made an actual TTF version of the font (using an online tile-based font editor) that includes all printable ASCII characters. (No accented letters or fancy non-ASCII punctuation yet, though, and the lowercase letters are identical to the uppercase.)

In fact, I made two versions: one with variable letter spacing, and one that’s monospace. Here’s what they look like (at 200% size):

I haven’t tested these fonts in Photoshop, but they do work just fine in GIMP: just set the font size to (a multiple of) 5px, and line spacing to 1px or more.

Also, I’ve released these fonts into the public domain (via CC-Zero), so you can do whatever you want with them. In particular, if you don’t like some of the design choices I made (like the slashed zero, or the serifless capital I) or just want to add more glyphs, you’re free to clone the font and edit it yourself to suit your needs; the online editor is pretty easy to use.

Ps. I went and made a couple of even smaller variants of this font:

At 3×5 pixels, this is about as small as a pixel font can get and still remain legible. It also, not entirely coincidentally, looks very similar to just about every other 3×5 pixel font out there.

Even at this size, some of the glyphs (especially the more complex punctuation symbols like &, @, # and *) suffer a bit, and some creative solutions (like the minuscule-style N) are necessary to keep all the shapes distinct. Still, it’s more or less readable, even if some of the letters may be ambiguous if used on their own without context (such as the M, which could be mistaken for an N or an H).

Of course, you’re also free to tweak this font any way you like, or even to design your own.