I would like to create a flyer, that has a design similar to the one below. I’m thinking of several images, converted to a kind of halftone (simulating depth), but with arbitrarily scattered dots rather than symmetrically aligned.

Until now I’ve had some luck with scripts that fill shapes with dots, but these only cover a short range of dot-sizes and they still end up more pattern-ish than I would want.

Secondly I’ve tried other scripts that connect the dots with lines, but these tend to malfunction in one or more ways. Here I need a solution for connecting every single marked shaped with lines from center to center.

I’m looking for more or less the same effect as displayed in the image below, and I would take every pointers that in anyway could help automate the process so that making a general design would not be overly time consuming. 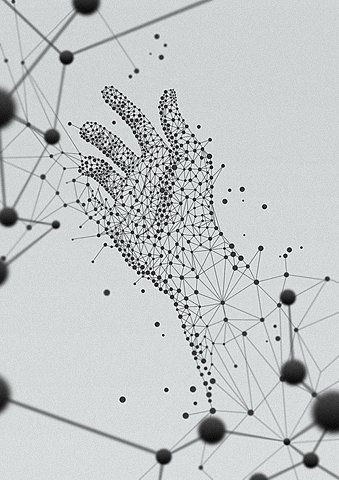 This is called Plexus effect. There are plugins for doing exactly that in AE (because you can add the blur to planes and movement and other effects).

To recreate this is Ai you can:
1. do it in AE then export to Ai
2. use script called AllPoints found at http://www.wundes.com/JS4AI/ and then put dots manually (but this connect ALL point to ALL points so you would need to work on small portions of your picture and glue it later manually)
3. Use plugin like Phantasm http://astutegraphics.com/software/phantasm/ and then connect dots with pen tool.

But yeah, Affter is a tool to do that. There are many tutorials on youtube called “connect the dots” that show how to make this kind of graphic.