I want to create headings in a book, which are encapsulated in a box with a small arrow at the bottom. See the Photoshop mockup below.

Is there a way to make a paragraph style or something similar so that it adds the small arrow automatically to all heading with this, without having a distinct shape for every heading.

I think I found a way, but it is a bit fiddly and, I guess, hackish. However, once you’ve set it up, you can quite quickly apply it to all the headings you have.

Here are the steps:

(If you ever accidentally deselect the glyph and due to the negative kerning have trouble reselecting it, with your insertion point somewhere in the paragraph press Cmd + Y to bring up the story editor to easily select it there). 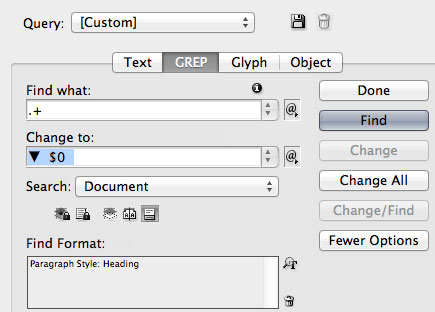 In the format you put your Heading Style, so it will only search for that. In the “Find what” box you put .+ which searches for everything in each paragraph (with your Heading style). In the Change to Box, put your arrow glyph (you can just copy it in there), then the amount of spaces you figured out (this will be the space to the left of the box), then $0 which means now it puts everything behind these spaces that it found earlier. After that you put again your spaces (for the right space of your box). 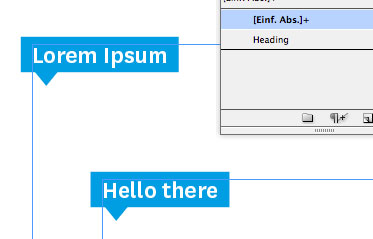