I am very much dying for a second opinion on a logo that brands my name. I have gone through many different logos without asking what other people think of them.

The goal here is to represent my name in a way that is text-less and minimal. For example, this here is my latest attempt: (ignore the text, the logo is the important thing here)

This are my questions to you guys:

Also, the logo should (and feel free to question my goals for the logo):

To further emphasize that I’ve gone through many logos, here is an .ai I made organizing my past logos from oldest to newest: 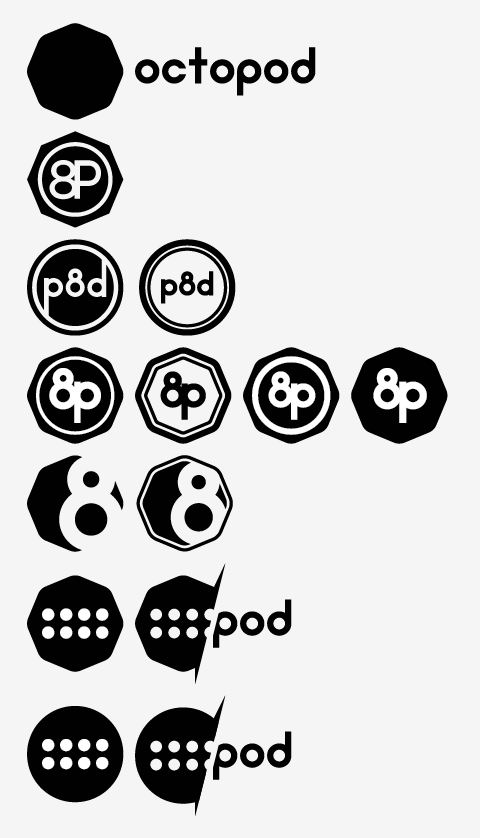 In addition to the main questions above, additional opinions and critique is appreciated. I really want to settle on a logo already, because this is insane.

Also, if it already wasn’t clear, the logo should represent my username, which is “octopod”.

I wasn’t familiar with the name Octopod before seeing this. If the purpose of the name is significantly detached from the toy of the same name then I think you’re OK to go with it.

With the most recent design you’ve shown, I think having the eight dots in the circle is an elegant way of visually representing the name and worth pursuing. I feel that whilst it would seem a logical design choice to pair the circular font with the very circular logo, it lacks contrast and tension because the structure is very passive.

I think what you have here is a start point from which to explore a variety of approaches, which can be done whilst retaining the eight circles inside the shape. Some of these could be:

Use a squarer font, or very square font and investigate creating contrast in shapes.

Create a colour version as well as a black and white version, and play with shapes overlapping, such as overlapping circles of different colour in subtractive or additive manner to make the main circle.

Play with the hierarchy of logo to text.

Incorporate the symbol into the text itself.

These are just a few suggestions which could be points for exploration. You should be able to add more.

I think you should be confident in the idea, because it feels like a good one (latest version) but just needs exploring in depth now – and ideally in colour too.