I’m not a designer. I’m making a new logo for an online community I’m a part of. I always liked bright colors, but not saturated enough to hurt the eyes. I’m usually using the HUSL palette to verify that the color is indeed human-friendly. 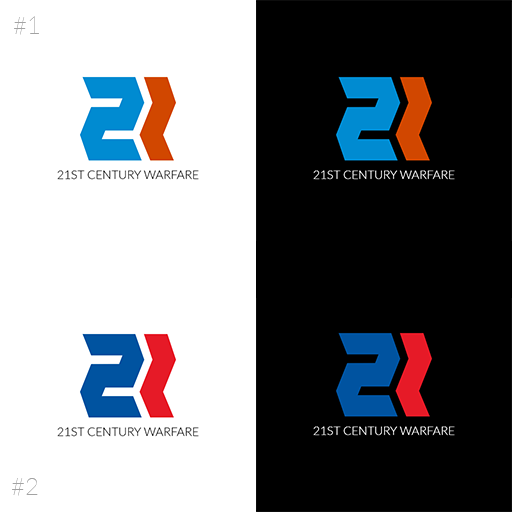 After some thinking and fiddling around, I came up with #1. The colors were taken from the game our community is related to, but that doesn’t matter. I could might as well pick them in Paletton. What matters is that I think they look good.

Now, my companion believes strongly that we should use popular colors instead, something off a Coca-Cola/Pepsi label. So I made #2 (Pepsi blue and Cola red). And he honestly thinks that it’s better than #1.

Clearly, luminosity is more balanced in #1 (between blue and red), and it’s somewhat in the middle of the scale, so the logo stands out equally well on both white and black. Now, #2 looks somewhat focused on “1”, even on white background. Which looks odd to me.

Another thing to consider is that since #1 is brighter on average, it’ll stand out better in big groups of logos. It’ll also grab more attention at the top of a website or a document.

My opinion is based on intuition, though, and I’d like to know if there is some objective way to back it. Or is this all about our tastes, and I’m just imagining things?

This question might seem too specific, but I believe it’s not. I just have no examples, other than my current task.

While there are many principles of design that are very useful, design is about intuition (hence why some people are naturally ‘better at it’).

In this case I would agree with you that the first design is more balanced on both black or white backgrounds. In addition, the colours are more friendly on the eye. The strong colours in the second logo are reminiscent of limited colour palette systems (such as old 8 bit), which in turn gives a slightly dated appearance.

A counter argument is that the second has stronger colours, giving a ‘bolder’ appearance and making it more likely to stand out. However the different luminosity shifts the focus between the two characters.

As I said this is more of a personal design choice rather than a hard and fast rule, but I hope to have helped somewhat.