I’m trying to connect two open paths with a perfectly smooth curve. It is an easy task in CAD/3D software, But I can’t figure out a way to accomplish that in Illustrator.

The top part of the image is what I’m trying to do (I don’t expect Illustrator to handle curve continuity, just to make it smooth is enough).
When I use the Pen tool to extend one end of a path by dragging from anchor point, it always causes the original path to slightly change shape. (see the bottom part of the image). I’ve tried many things: connected path with a straight line and used reshape tool, created helper geometry, etc. to no avail.

So i’m asking for help. Of course I can export paths from Illustrator to Rhino and back, but there has to be another way. 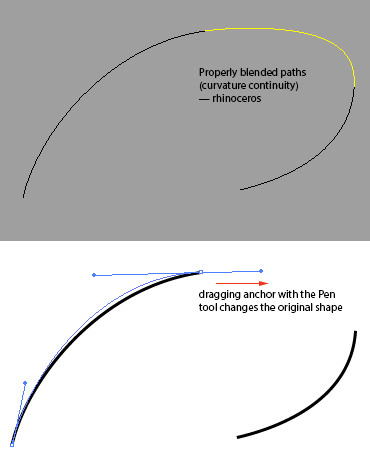 There’s a cludgy workaround way I know of to get exact smooth curve joins like that in Illustrator (below).

If you’d rather simply make lots of approximately (not precisely or consistently) smoothed joins check out the Join Reasonably script, co-incidentally discussed on this similar looking question.

So here’s my slightly long-winded but precise method (works in CS5).

If the wrong path section changes shape with the smooth join, you might have forgotten to send the new path to back before starting (also make sure it’s not on a higher layer than the other paths).

It’s not a simple method for what ideally would be a simple task, but it works.