This seems a stupid question but I am not sure about its result. suppose we want to draw a yellow triangle over a blue rectangle. Is it important (for printing purpose) to colorize the below of triangle or not? (see the below image). If the input of printer were photoshop or CorelDraw or illustrator file then printer has access to its layers and that is not clear to me printer prints each layer simultaneously or not? If I am right so I should be so careful when I am using layers. Right?

I. Normally, a drawing program will send the data to a printer as you expected in this case. The printer will not care about the blue rectangle below the triangle.

II. A printer does not have “access to the layers” because the drawing program sends only the result the user is expecting, regardless of if you have a ton of layers below.

The program will only send the final result to the printer 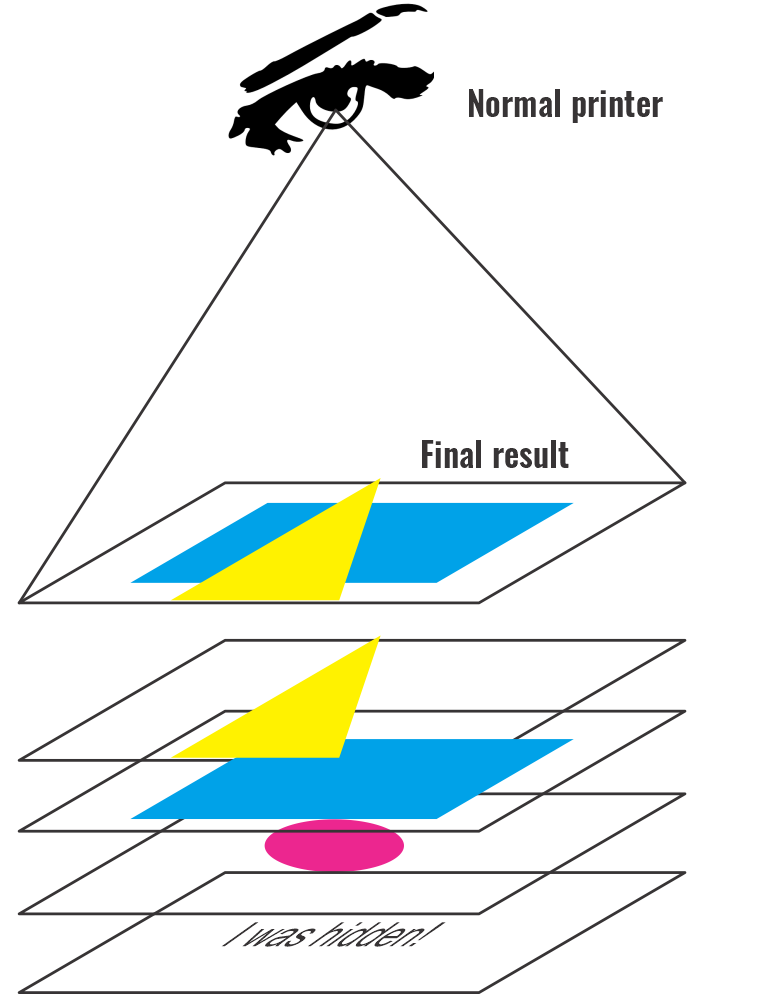 But let me explore a bit, and I hope I am not confusing you.

III. Sometimes we use an in-between file to print. An output file and we send this file to be printed, reducing the possibility something is “moved”. If you send an editable file and you do not have the fonts, opening a Corel Draw file or Ilustrator can change the fonts, but in an output file, you reduce this possibility.

The most popular file is PDF, and one of its flavors flatten the file. But it also can keep the objects (not the layers). But can rasterize elements like transparencies or gradients.

Another option is exporting to a raster image, let’s say TIF, which also flattens everything.

IV. But in commercial print there is a concept called overprint. This is an indication that what lies below the channel you are marking, needs to actually be printed.

If you send that same triangle to be printed turning on the overprint on the yellow channel, the cyan rectangle will be printed and the yellow would be printed over (overprinted) making a green zone.

This overprint can be limited with some parameters, for example only shades of 90% or more, only 100%.

Overprint is normally used on the darker ink, for example black, so you can have black text over a shade of color below.

The advantage of doing this is that you avoid a potential misalignment of the plates, which could result in a white ghost around the text.

The values of the final black text over a cyan background will be c100+k100 instead of only k100.

But you should be very careful when using overprint. I once sent a file that instead of having a gray color had a ghost all over it.

V. Another process that can have an impact is physical cutting, like for vinyl shapes.

It will be different (depending on the software) having the pieces cut or leaving them complete.