Locked. There are disputes about this question’s content being resolved at this time. It is not currently accepting new answers or interactions.

I DO know this question has been asked at least a thousand times in this website alone, but I HAVE read many of those threads, I DO consider myself very knowledgeable and rarely ever ask anything, instead prefer to do my own research.

However, THIS issue is so strange, without hope for real enlightenment (since this question HAS been discussed so often and still I could not benefit from reading there), here is my issue:

favicon.ico exists, and (locally hosted development website) http://website/favicon.ico displays the correct icon. Its size is a mere 198 Bytes, so the size limit I found in Firefox’s about:config of 1024 Bytes is adhered to. According to the wisdom on favicons on the web the browser should ask for favicons on its own when there is nothing in the of the page. However, my apache log clearly shows Firefox (9.01) never even asks for it.

Next: when I add

I still don’t get a favicon.

Next: when I instead use

(note the trailing “?”) I suddenly DO get a favicon. BUt it cannot be a cache issue! First, I have cleared the cache, second, as I mentioned above, I already successfully loaded the icon file into Firefox through its URL http://website/favicon.ico

I am unable to explain this behavior of Firefox. Chrome shows the correct favicon, by the way.

This is my page head:

Here is what the server sends when the icon is requested, since some have asked for this. I have no idea why this would be useful, since a) I said my cache was empty for each test (checked with about:cache too), and b) I said the server is never even asked for the file when it does not show up. Firefox just does not ask without the “?” – with cache empty! The request shows up in the apache log ONLY when I use the appended “?”.

First, make sure you don’t have a “normal” cache problem by loading the favicon URL directly (put it into the browser’s URL bar) and force-refreshing it. If that does the job, no need for the complicated solution below.

My original problem cannot have been a cache issue: First, I did clear the cache, second, as I mentioned above, I already successfully loaded the icon file into Firefox through its URL http://website/favicon.ico

So I do (did) get the right icon in the browser when loaded directly! But I still have (had) the wrong icon displayed as “favicon”. Loading the icon file directly is (or was) independent of the display in the actual favicon location (except for when it is loaded for the very first time of course).

However, if you only have a cache issue and force-refresh works for your than this question/issue is NOT yours! And your answer isn’t an answer for this issue.

People should not ignore facts. When you are bombarded with lots of already answered and/or useless questions the quality of the question suffers for the moment and for the archive too. It is amazing how I have to fight with people who still insist that a force-refresh is the answer!

Note: You can avoid this issue entirely by using a cache-buster URL just like StackOverflow does, their favicon URL ends in .../img/favicon.ico?v=4f32ecc8f43d.

If normal cache clearing measures fail (just like they did for me) an answer is given here: “Clearing All Favicons From Firefox 3 Cache [How-To]” — and here is an archive.org version of the link (probably slower, but it won’t go away).

The steps from that page reproduced here: 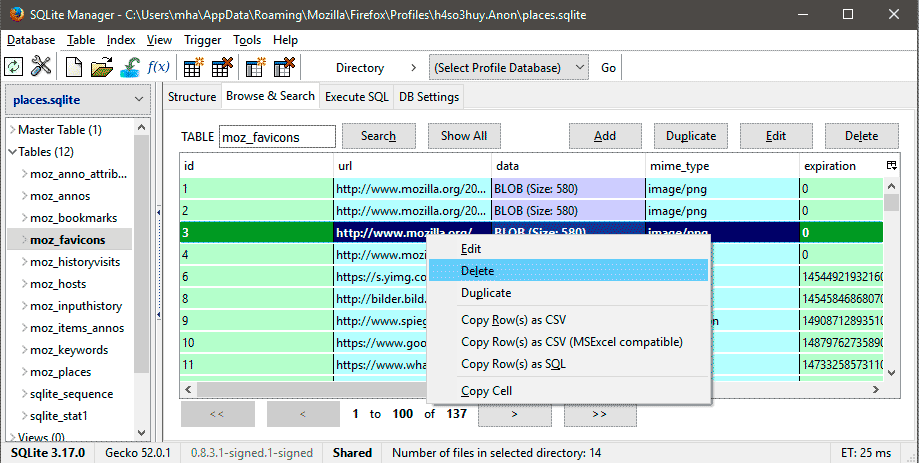 I started suspecting that Firefox caches favicons separate from everything else – it was the only explanation matching the observed behavior. So I googled for confirmation and found the above URL. Next I’ll try clearing that particular extra cache and see what happens.

UPDATE – SOLVED: After deleting the favicon cache using the “SQLite Manager” Firefox add-on all works as it should.

So the secret was the EXTRA (sqlite) CACHE FOR FAVICONS in Firefox, WHICH IS NOT CLEARED BY THE REGULAR “Clear Cache” command.

Update March 2017: I checked this Firefox add-on and also the standalone app suggested in this answer below and both do the job. The SQLite Manager add-on was last updated ~2 years ago according to its Github project page, but it still does what it’s needed for in this context. There are updates available from people who have forked the project, but that is just an aside.