I’m trying to find the name of this highlighted image element to look for similar vector icons. I tried to search by “link”, but can’t find anything like it.

How can I recreate this shape using a program like Inkscape or similar?

It looks like the whole shape is made out of circular arcs. Basically, to draw it, you first draw two concentric circles:

Then you duplicate them, and move them so that they’re a suitable distance apart: 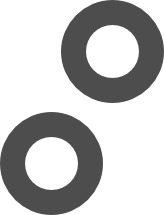 Then you draw a slightly larger circle and move it so that it’s tangent to the smaller circles, then duplicate it and repeat: 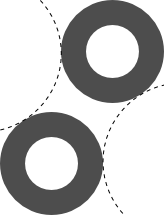 Finally, you fill in the area between the circles and get rid of the larger circles: 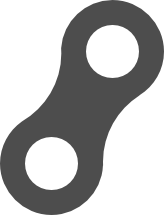 If necessary, tweak the nodes of the resulting path to get rid of any kinks where the circles touched imperfectly.

Note that I just did this quickly and entirely by eye. You can get better results if you pay more attention to getting the geometry just right. In particular, it might be better to first draw the shape in a purely horizontal (or vertical) orientation and only rotate it once it’s complete. That way, you can make use of Inkscape’s alignment tools and ctrl-dragging to get the larger helper circles positioned precisely.