A JPEG is characterised with three parameters: width (pixel), height (pixel) and bit depth (bits per pixel). And resolution is a characteristic for output devices, e.g., monitors or printers. Why? Resolution is measured in dots per inch or pixels per inch, with other words: the ratio of some discrete value to some unit of length.

As we can see from JPEG file properties, it also has a horizontal/vertical resolution. But how can we apply the concept of resolution to something that does not have a length? (It sounds funny for me to talk about a “JPEG file with a width of 5 inches”.)

And another word to this is about user perception: Let’s assume we have a JPEG image with a width of 1920 px and we look at this picture on a monitor and an iPhone:

So width is 1920 px in both cases and each pixel of the image corresponds to exactly one pixel of the device. So if we choose to look at these screens from a distance such that we have the same ratio of pixels per degree of vision, we would have exactly the same quality (≈ 70 PPD).

So why can we talk about the resolution of JPEG? 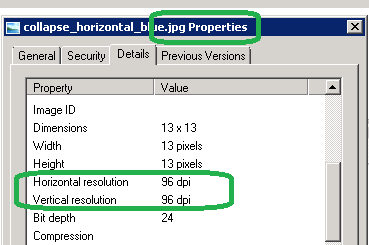 So the term resolution is heavily overloaded, and Very often misunderstood.

Images do not have physical unit resolutions on digital media

We have gone over this subject quite many times on this forum. And the consensus is that the physical measurement conversion values do not apply on digital media as long as they stay digital. So the resolution of a jpeg image is the amount of pixels you have. Because as you correctly put it different devices have different sizes.

Problem arises when you output stuff to physical media

The confusion arises because the technology of printing something to paper is wildly different form making images on screen. Now people from a print background will be somewhat obsessed with the resolution of the image. What they call resolution is actually just a conversion factor from pixels to physical units for their output device. (They have pixels to spare so they can output at different resolutions.)

This resolution is meaningless for screens. But people aren’t entirely attuned to different mediums. So you commonly see some print designers design for screen as if it was a printer.

DPI is just metadata, its just a expression of wish that the printer place this image at this size. It’s useful for many tasks so you don’t always need to resize the image. But that’s all it is.

But these guys came first so they have already manipulated perceptions so they have dibs on image resolution as a topic. Right or wrong.

* I’m just saying this because I have dealt with this kind of stuff.