I have tested several Thai fonts in InDesign CS6, and none of them are able to display Thai diacritics in the vertical stack correctly. The fonts I’ve tested include Microsoft (Norasi), Adobe (Adobe Thai), and Google (Noto Sans Thai).

First, here is how the stack should appear, using Microsoft Word with TH Sarabun font:

Tone marks are displayed directly above a consonant (e.g. ให้), but are able to move vertically upwards to make way for vowels (e.g. ทั่ว).

In InDesign, the diacritics are rendered in one of two ways, both of which are incorrect. With some fonts, in this case Adobe Thai, tone marks appear directly above a consonant, but do not move upwards to make room for vowels. This leads to a clash (in this example over the word ทั่ว) in which the tone mark and vowel appear on top of one another:

With other fonts (in this case Norasi), InDesign tackles the problem by placing all tone marks vertically distant from the consonant. This fixes the issue of tone mark+vowel clashing in the same position, however, it is still not typographically correct. In this example the tone mark in the word ให้ is too far from the word, and appears to be floating in thin air:

While this is more readable, over a whole body of text it looks very strange, with all the tone marks floating high above the consonants. Microsoft Word unfortunately is leading the way with how it should be typeset.

I’ve fonts from a variety of foundries, and all of them give results that are not acceptable for published material. Is there anything else I can do to make Thai work in InDesign CS6? Or am I just waiting for the single magic font that works with InDesign? I would’ve thought that would have been Adobe Thai!

For complex scripts such as Thai, ensure that “World Ready Composer” is enabled in the paragraph options: 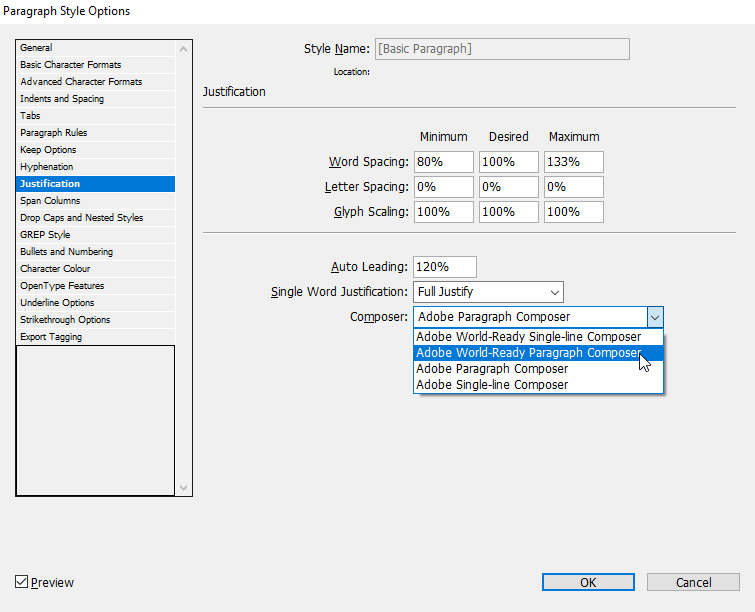 With this setting enabled, the diacritics are working correctly across the various fonts.