Are there any guidelines or standards when referring to colors?

Lets say I am writing an article (a scientific one in my case, but I guess that should also apply to a news article or an advertisement) where I have to refer to a figure in a text.

Lets say I chose the popular seaborn color scheme to produce a few simple bar plots, like the following, from their examples: 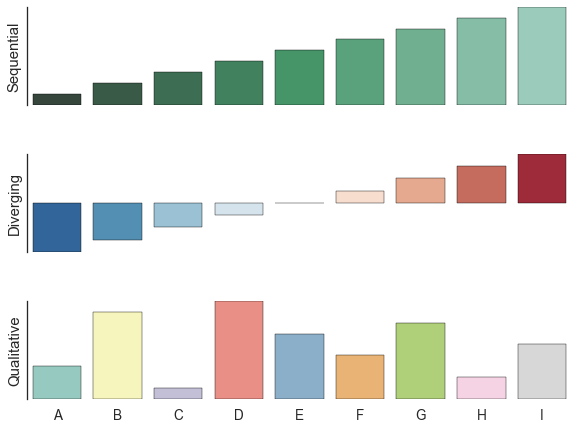 You could think of various reasons to refer to the different bars: “Our product I ist much better than all our competitors!”, “At point E there was a clear shift in attitudes”, “Sample B exhibits a clear increase over sample A”…

But sometimes, it makes more sense to refer to a color, instead of an identifier, even though that can cause issues for people with color blindness and with the reproduction of said color.

But what kind of terms can I expect to be known by a general audience? What terms should I use for certain audiences? In a fashion context, there probably is a perfectly fitting name for each color in the sequential row (probably stuff like Ocean, Petrol, Jade and Obsidian), but for me, those are all green_ish_, which probably also brings in the guy vs girl issue. So sequential colors are probably a bad idea in a context where I have to refer to a single one, which probably also applies to diverging.

Qualitative seems like a much easier pick, especially when using colors that are agreed on, like red, blue, yellow or black, but after a certain amount of colors, I am running out of easy ones. And how do I address, lets say C then?

What guidelines or rules are there, for picking and addressing colors in such a situation?

Are there any guidelines or standards when referring to colors?

To take your ‘guy vs girl’ issue a bit further, take a look at this XKCD color survey, which is pretty interesting, amusing and very relevant.

…what kind of terms can I expect to be known by a general audience?

There is no universally agreed upon naming system for colors so unless you’re aiming at a specific audience that you know will understand some specific naming convention or system then you’re better off not using colors as reference terms.

Most will understand the difference between “blue”, “red”, “black”, “white” and basic color names, but as soon as you’re straying from the colors you learn as a child then you’re throwing in a load of uncertainty and ambiguity. If there is enough contrast in your colors then you’ll have more luck; most people will be able do understand the difference between “magenta” and “teal” for example, but if you have “magenta”, “fuchsia”, “salmon”, “teal”, “turquoise” and “aqua” you’ll start to have a problem. Throw in some color-blindness and you’re definitely fighting a losing battle.

With any significant number of colors and no agreed upon system of color names all you can do is resort to describing the color with something like “greyish-light-purpley-blue” …which (is probably a slight exaggeration, but) sounds ridiculous and is considerably more cumbersome and ambiguous than “sample C”, “data point 3” or “the third bar” or whatever.