Most designers hit a roadblock at one time or another.

Few designers get those “dream” projects where they are allowed to create anything and everything they want. In most cases we all have to adhere to some restrictions.

After dealing with similar restrictions repeatedly, it becomes very easy to get mired down in how the design problems have been previously solved rather than finding new solutions.

I’m familiar with mood boards, idea books, and the like. However, these all seem to basically take the user down the same previously traveled paths.

What specific steps should one take in order to break out of current mindsets and expand horizons to look at a project in a fresh, inventive manner?

Is there a processes you use to conceptualize something in a new way? 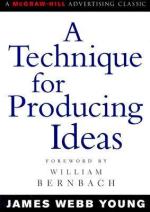 James Young’s A Technique for Producing Ideas outlines a deceptively simple system that requires great discipline to complete. I followed pieces of his approach instinctively before discovering it but keeping Young’s five steps in mind has helped me expand my output.

It seems obvious when you read through it but it’s just one of those things that only time and discipline can perfect. And true to Young’s own reflections on the topic, you must be a curious soul to do it well. Ideas come from your mind’s ability to reshape information in valuable new ways. You must have something in the brain’s databank to reshape in the first place. If you aren’t the curious type you’ll be better served by a job as a production artist.

When all else fails

Go back to what you should always be doing: Sketch your heart out!

If you commit to not limiting what you put on paper, you’ll be surprised what comes out of your head. Take a coffee (or scotch) break or head out to the local park after you’ve made some headway and come back to your sketches with a fresh eye. The conceptual connections will start coming together before you realize it.