In studying composition, we’re told to pull the viewer’s eyes into the frame using a strong focal point, and then lead his/her eyes into moving around inside the frame and hold his interest inside the composition.

Okay, but I’m curious. If the focal point has the most contrast and visually pops out most from everything else, why do your eyes move away from it to other elements?

To add a bit of science, here three things that are counter-intuitive but important to know about vision.

They explain why viewers navigate visuals by drifting from a focal point, following any natural flow – and why it feels so much more jarring when there isn’t a natural flow to follow.

Here’s a rough diagram from an article about eye-tracking I found. I think this diagram is actually over-estimating the clarity of the area outside your main focal point – the P area really only notices movement and very strong shapes or colours: 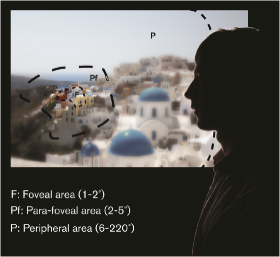 Your brain chooses where to jump/saccade to next based on the limited information it’s getting from the blur.

When quick unconscious saccades aren’t enough, big shifts in attention happen – the ones you notice and are consciously aware of. These are much more effortful – whereas saccades are something your visual system just does unconciously.

Your brain doesn’t want to spend too much energy doing too much processing or attention shifting, so it will try to do what seems to be the quickest sweep taking in those things that stand out in the fewest jumps, figuring out as much as possible by educated guesswork. It does need to identify all the key features that stand out, however – unexplained anomalies put the other little guesses in doubt – so it’s natural for a focal point to not fix vision but to be a starting point for the eye’s exploration via saccades.

For example (from the saccades wikipedia article) here’s what eye trackers show your eye is actually doing when you think it’s looking straight and steady at a face:

This is why it helps not only for secondary areas to stand out clearly, but also, for there to be features like leading lines or a clear hierarchy, giving a path or stepping stones to guide the eye’s natural movements the right way.

In a well composed piece, this exploration is a chain of saccades that finds its way naturally around the piece in the intended order without the viewer feeling like anything effortful has happened.