I would like to achive the following as shown in the pictures below. The spiral should be bend only on one side, sucht that the upper and lower ends come closer together and converge at the end (see my second picture). Buuut it hasn’t to be like in my second picture. The gaps between each loop have to be the same size.
In the end it should somehow look like picture number 3.
Do you have any ideas…?
Many thanks! 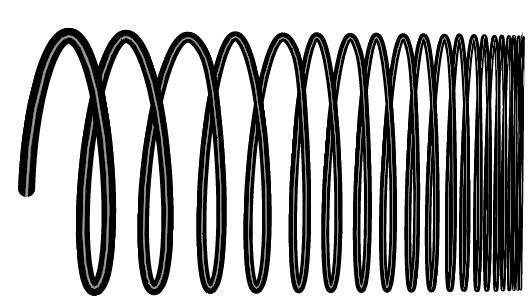 Thank you all for your help and the great support.

Just to avoid misunderstandings, it doesnt have to be in 3D, but as I understand correctly, it would be the easiest way to draw it in a 3D program instead of Illustrator. Can you recommend any freeware 3D software that would be great to draw such objects? I think Blender would be a great programm?

I am not at all sure if the 3rd image in the question is what you want, but I present a way to make something resembling. The meaning of term “bent only in one side” is beyond my capacity if it occurs in the preferred version (=image 3). To get better answers you should draw some sketches which all have the wanted property.

The 3rd image has has quite complex and much more realistic glosses when compared to the gradient that was accepted in your previous case Spiral with narrowing / tapered line in Illustrator?.

You can get plausible glosses without drawing them by using Illustrator’s 3D revolve effect. Your wire thickness is now fortunately constant which makes it possible. Of course, it’s a fake and it needs some not so straightforward tinkering when compared to what’s needed in creating the shape in a proper 3D CAD program.

This is my attempt with the 3D revolve effect: 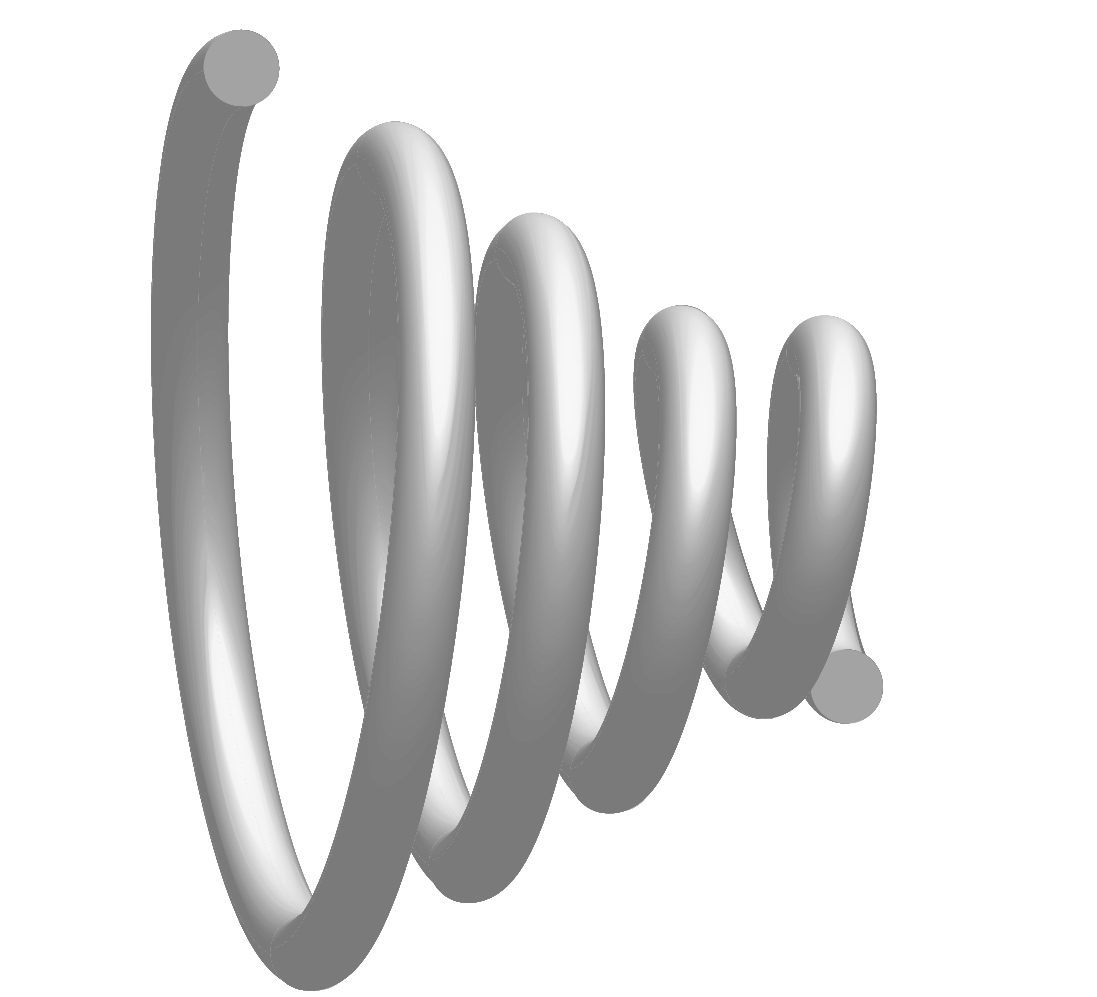 It’s not especially regular because the sizes and angles are not calculated, everything is only eyeballed.

How it’s done should be clear after seeing this. At first I have 2 half-toruses (=revolved circles) seen from opposite directions: 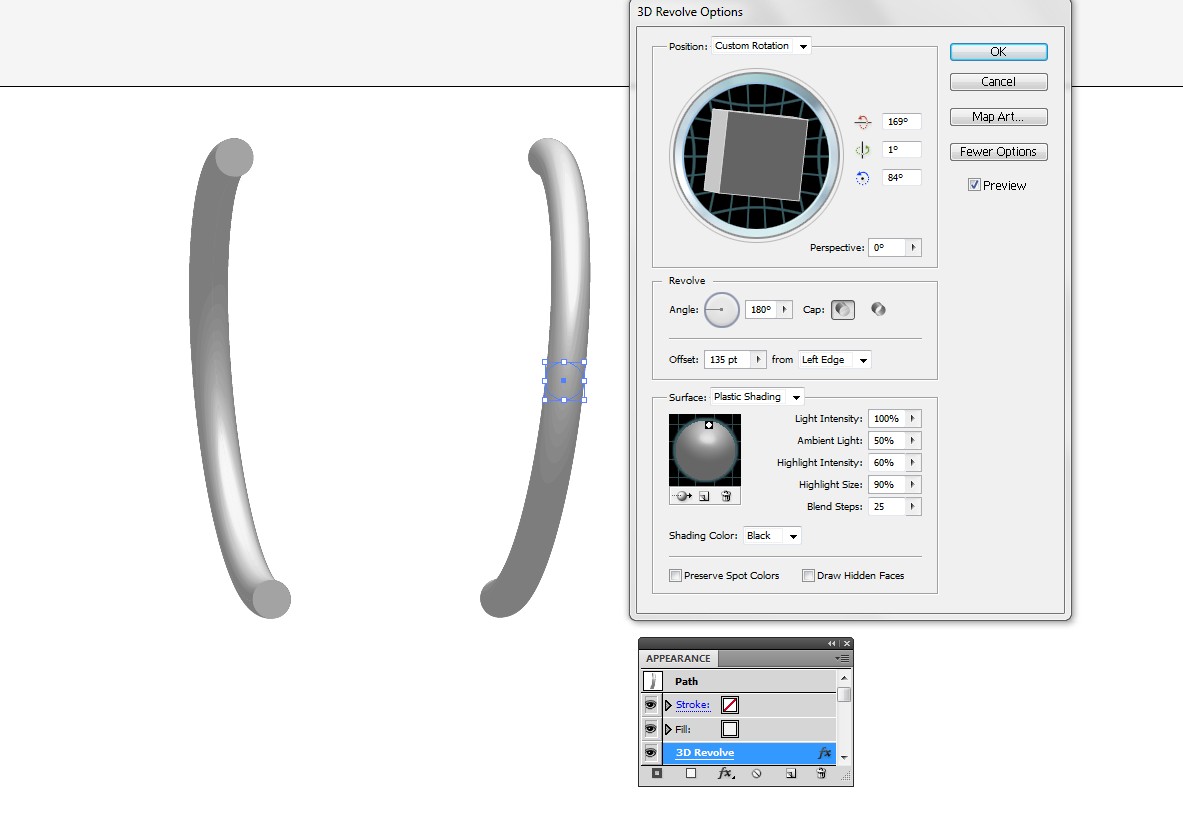 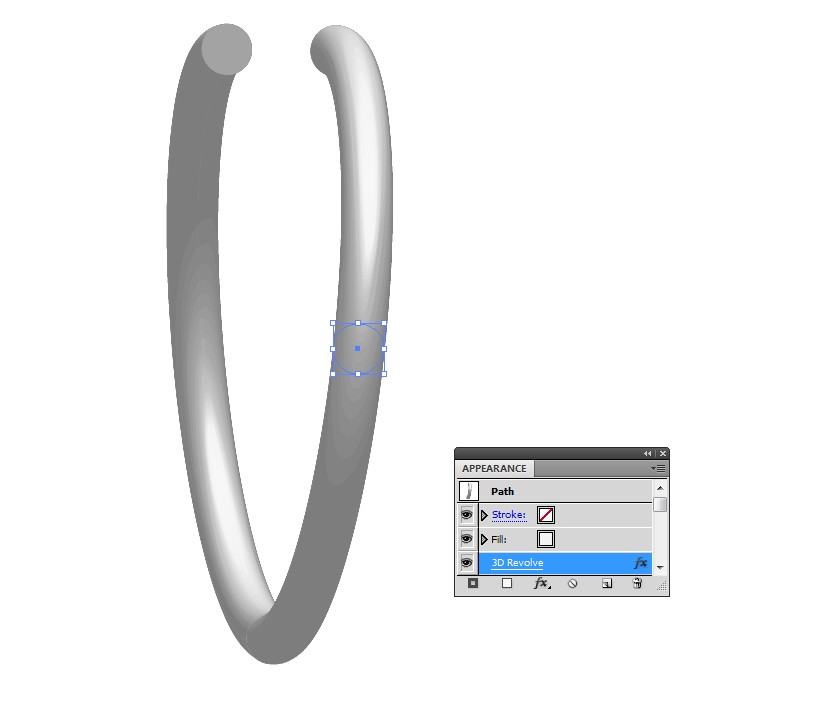 A longer spring needs more half-toruses. The tapering needs different revolution axle offsets. It needs also different tilting angles to make every turn cover as much of the total spring length. I used the same tilting angles as above and rotated the parts manually after expanding the appearance. These were my revolved half-toruses: 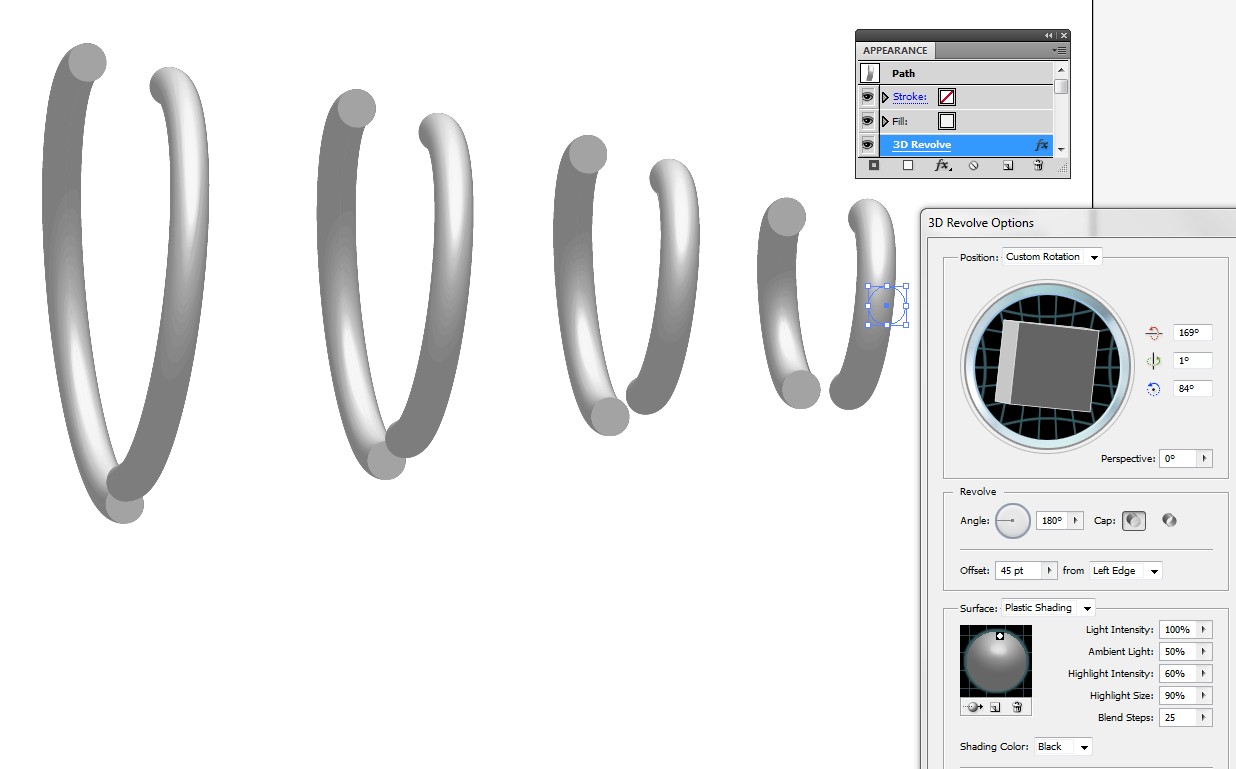 I made the parts freely editable by applying to them Object > Expand Appearance. After it each of them was rotatable for the right tilting.

In the 3D revolve dialog you must set the light to make the wanted gloss and shadow. The number of blend steps must be high enough to get smooth shading. I had to lift the number of steps to 60 because 25 shown in my attached revolve dialog image created too coarse shading after expanding the appearance.

BTW. There’s 9 pieces. Every piece has 60 subshapes and every subshape has say 150 nodes. It’s quite a heavy construction. Have a bunch of springs like this and your Illustrator would become so slow that you cannot work with it. The shapes cannot be simplified with Path > Simplify because it generates easily gaps. I recommend you to rasterize the shapes to make the load lighter. Use high enough resolution to keep the image sharp.

There’s no need to rasterize it in Illustrator. The vector image can be pasted as pixels to Photoshop into an empty image which has high pixel dimensions – here 1200 x 1200. Use the old partial greyscale inversion trick to create metallic look: 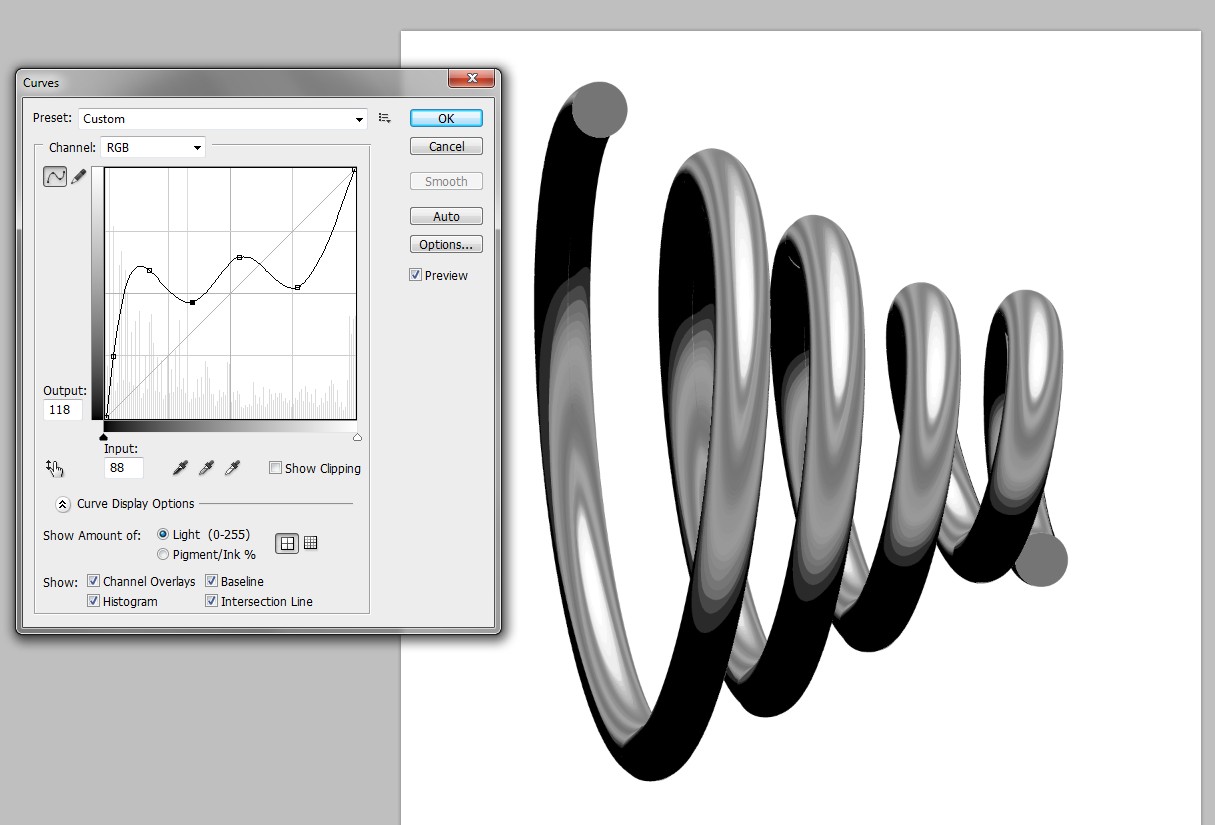 Adjust the light in the 3D revolve dialogs so that there’s at least nearly black and nearly white or increase contrast after pasting the image.

Another approach to keep it lightweight is to use only a few shading steps. The light must be adjusted so that there’s at least nearly black and nearly white + a couple of intermediate greys: 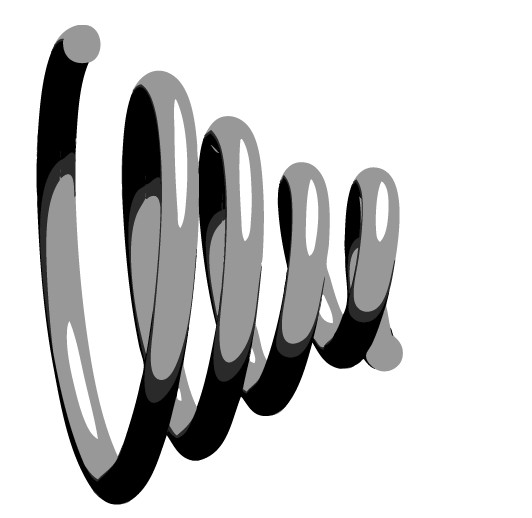 It’s not at all realistic, but it can be a good enough for something.

You may not need monsters like Blender, Maya etc… A simplified freeware 3D CAD program can well be enough. I have numerous times recommended Design Spark Mechanical. It’s a free version of SpaceClaim. Surely serious construction management tools, photorealistic rendering and also a great part of drawing tools are disabled to prevent professional use, but it can still create quite complex shapes.The program is very easy to use.

There you sketch a circle and a line. The line is used as revolution axis:

The circle has diameter 2mm. It’s my wire.

In 3D mode you launch Pull > Revolve > Helix and type the parameters. I used 30mm length, 1 turn/4mm and tapering to smaller diameter with -15 degrees angle. 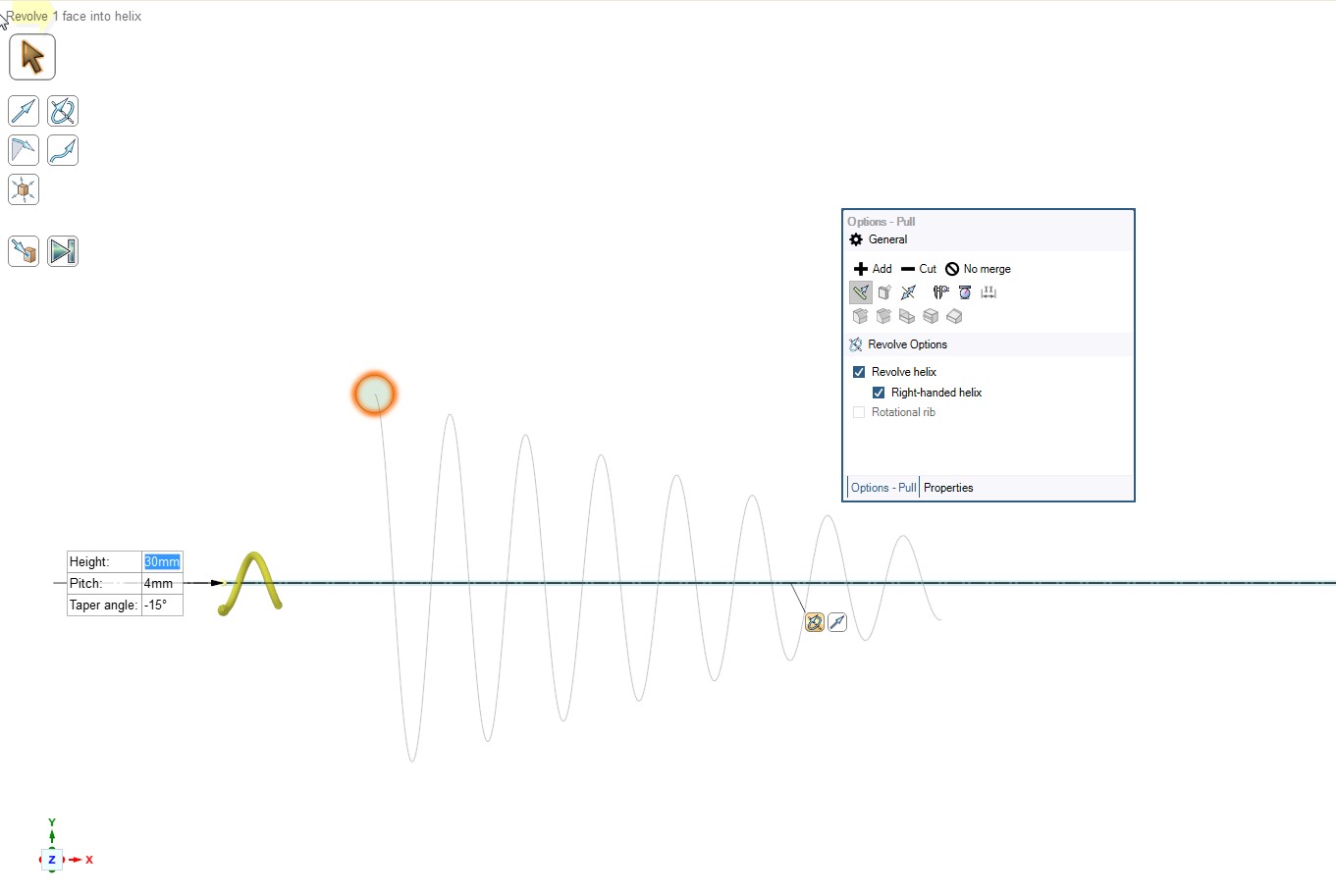 This is the result. I made also a grey copy of it and rotated it to different viewing angle. 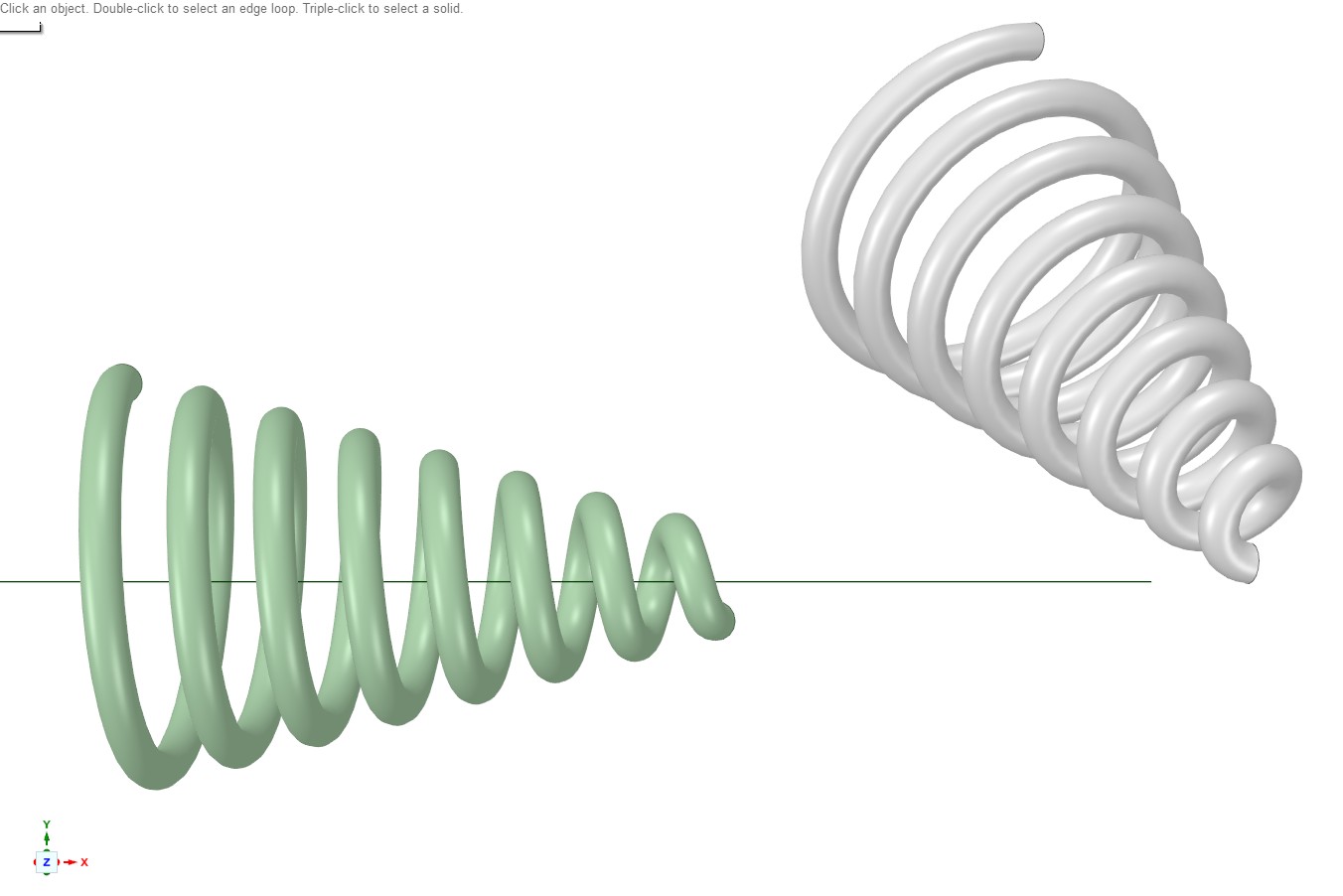 In the next image I continued the shape with no tapering and shorter pitch to get a couple of tight turns. It was drawn as separate item, but the parts can be joined to one easily: 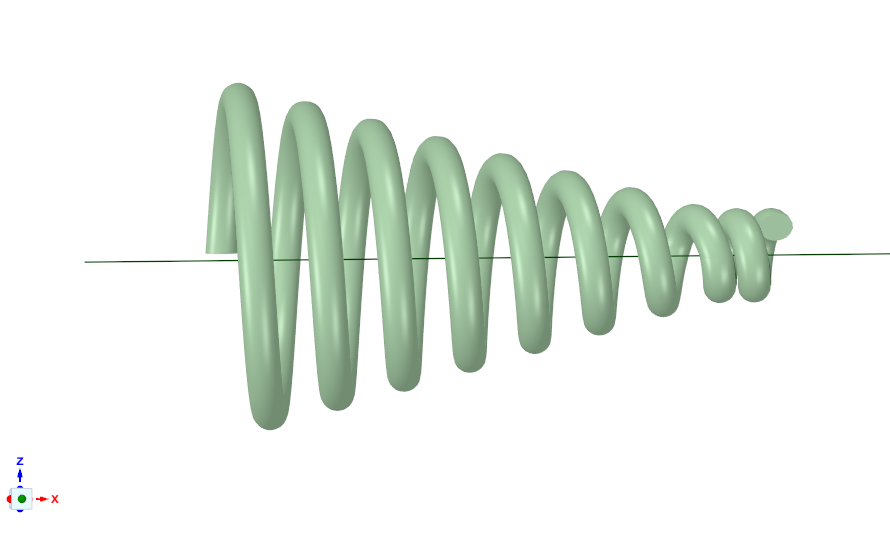 A 3D design scene with hidden line wireframe can be printed as PDF. The result is an editable 2D vector image which opens in Illustrator. Exporting for Photoshop’s 3D is also possible. Here the spring is saved as OBJ and opened in Photoshop: 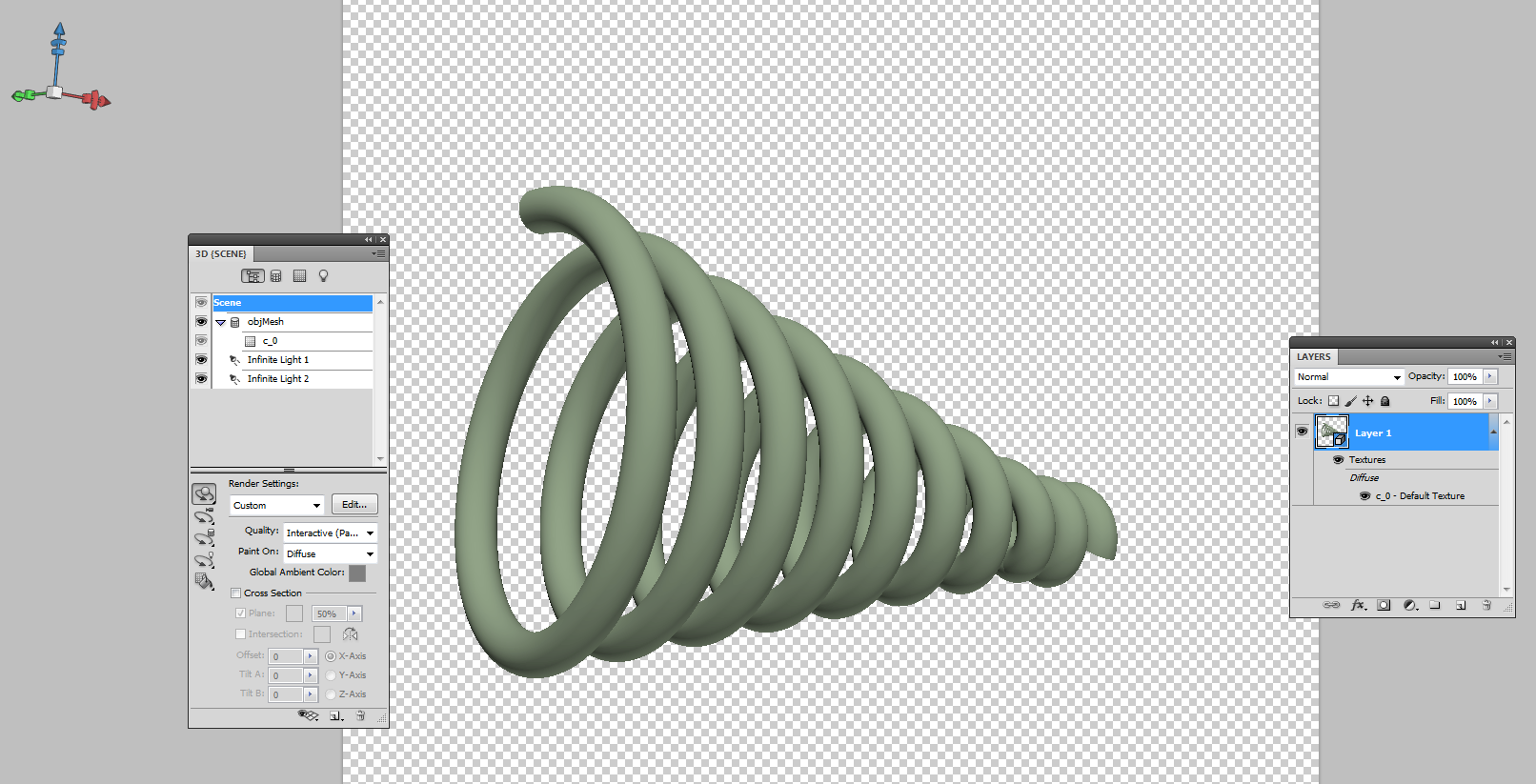