I am trying to find a way to convert a solid object fill in to millions (more or less) lines?
for example: 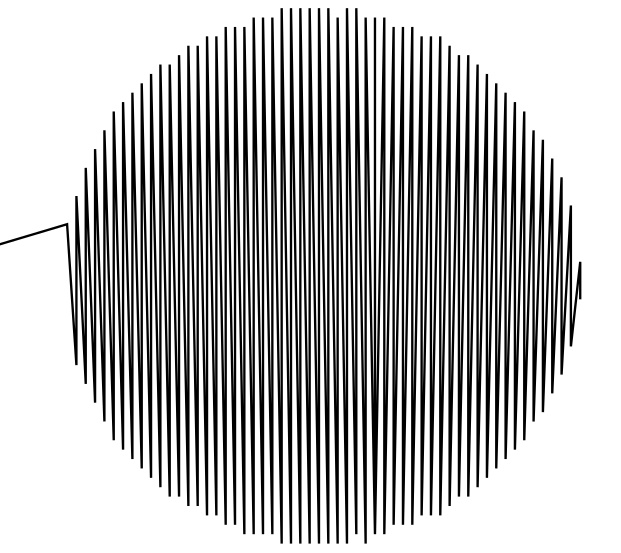 This is a partial solution for Inkscape. Another answer for Illustrator shows how one can use the Scribble effect in a non-random way and get the wanted straight line zigzag fill and the result needs only some minor manual fixes (=gap fills if the shape is complex)

Inkscape hasn’t such effect. It has a Path effect which generates coarse hatch fills, but the result is very coarse. In theory it could make the same as Illustrator’s Scribble, but it simply doesn’t have the needed adjustability and accuracy.

The questioner gave in a comment one hint: There’s 3rd party extension by a plotter manufacturer (=EggBot) which can generate some resembling fill patterns. I skip them because I haven’t them. I tried to get them, but the installation stopped, because my Inkscape isn’t installed in a standard way.

If your shape is vertically symmetric so that the upper half can be presented in XY coordinates as Y=f(x) where f is a formula written with Python math functions and operators, you can plot the zigzag fill with Inkscape’s Function Plotter extension. As an example we check your circle.

I must cheat a little, because the exact formula for a triangular zigzag curve is complex. It needs tricky modulo arithmetics. I do not know how to write it with Python’s functions. A competent programmer probably could say it in a second.

But Python has some generally known (=same as in Excel) elementary math stuff such as sine, pi and squareroot. I use them, because the resulted curve can be converted to straight lines later. 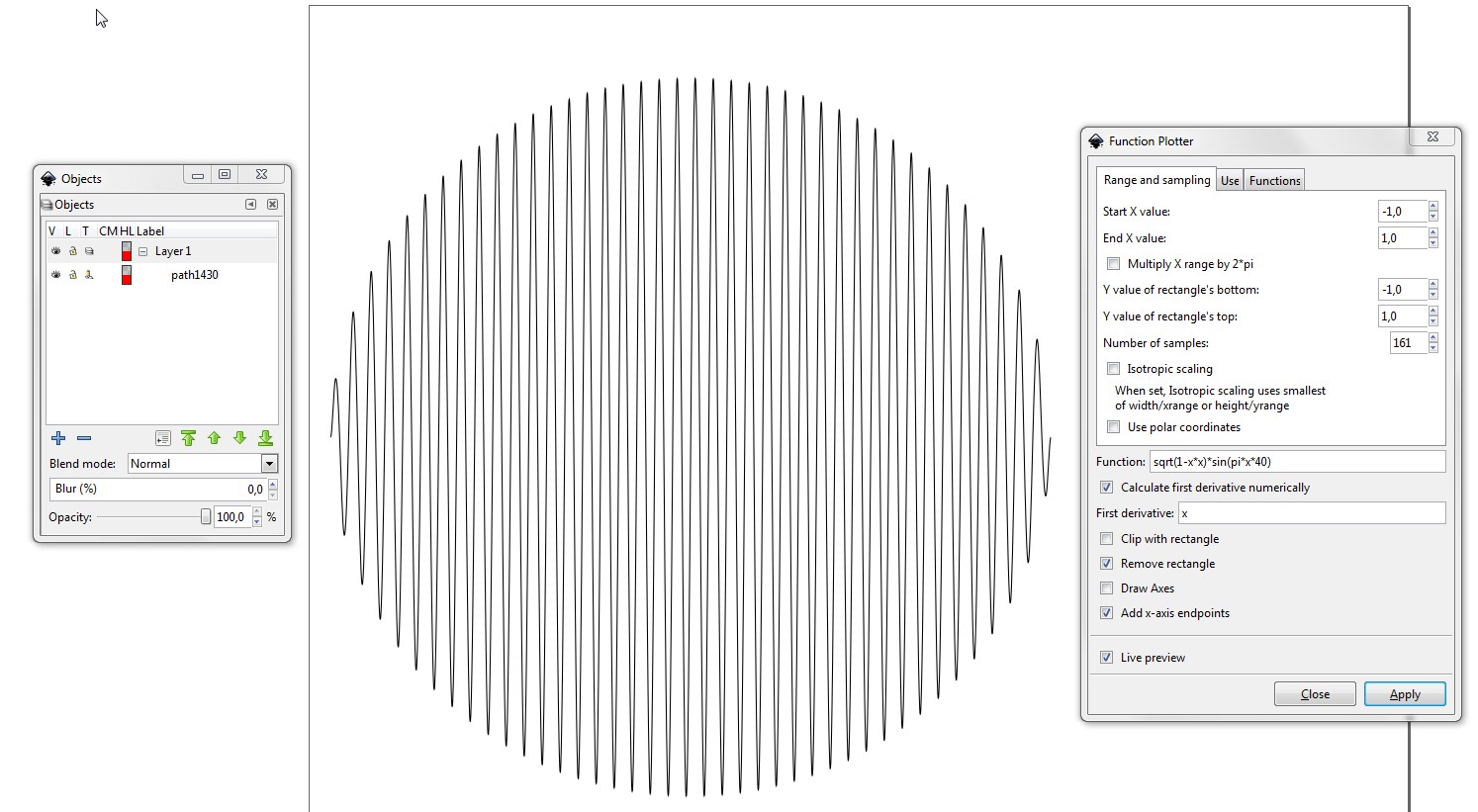 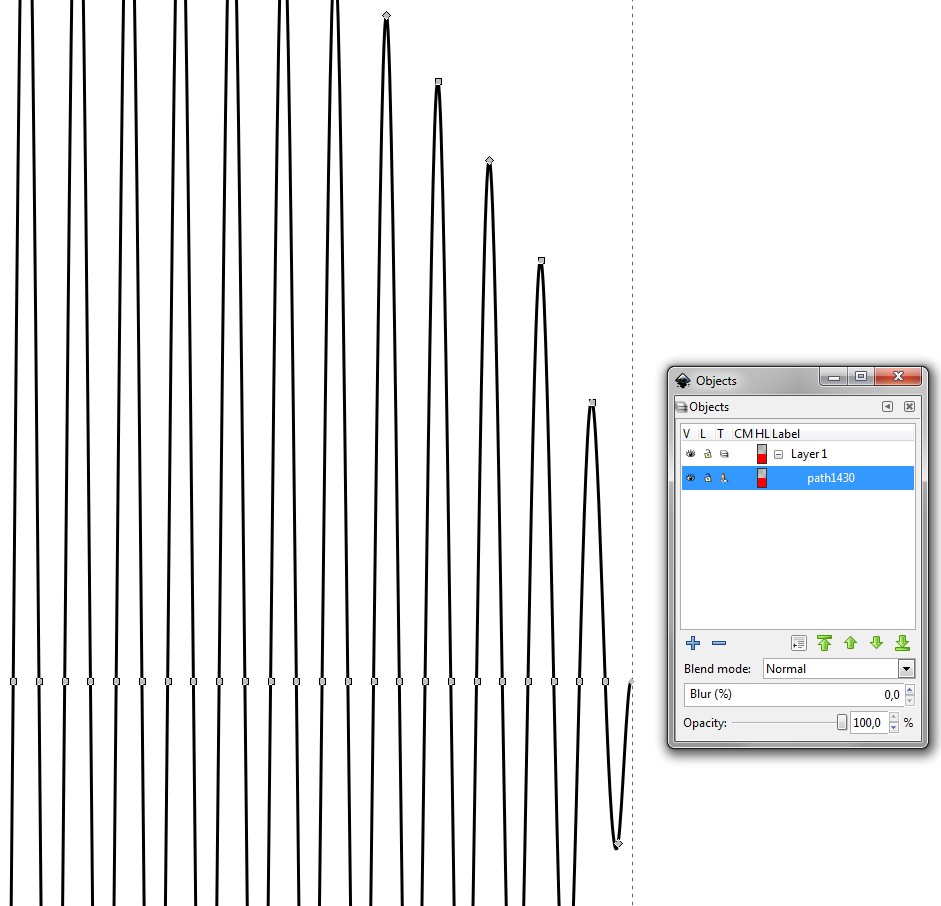 To make it draw a square and goto Extensions > Render > Function Plotter. I selected the square presents x and y ranges both from -1 to +1.

The function is taken from electronics. It’s amplitude modulated sine (no carrier!). The envelope part sqrt(1-x*x)is a half circle. The last number 40 defines that there’s 40 full cycles of the sine curve i.e. 40 top and bottom peaks. It has defined to have total 161 nodes in the approximate. There’s a node in every zero crossing and peak.

If one converts all nodes to corner points, he gets the triangular form without calculations. Extension Modify Path > Flatten Bezier does the job. Here’s an example of flattening:

You should apply Flatten and then select all zero line nodes except the leftmost and the rightmost with the none tool and press DEL. Then flatten again and you are done – only straight lines, no extra nodes: 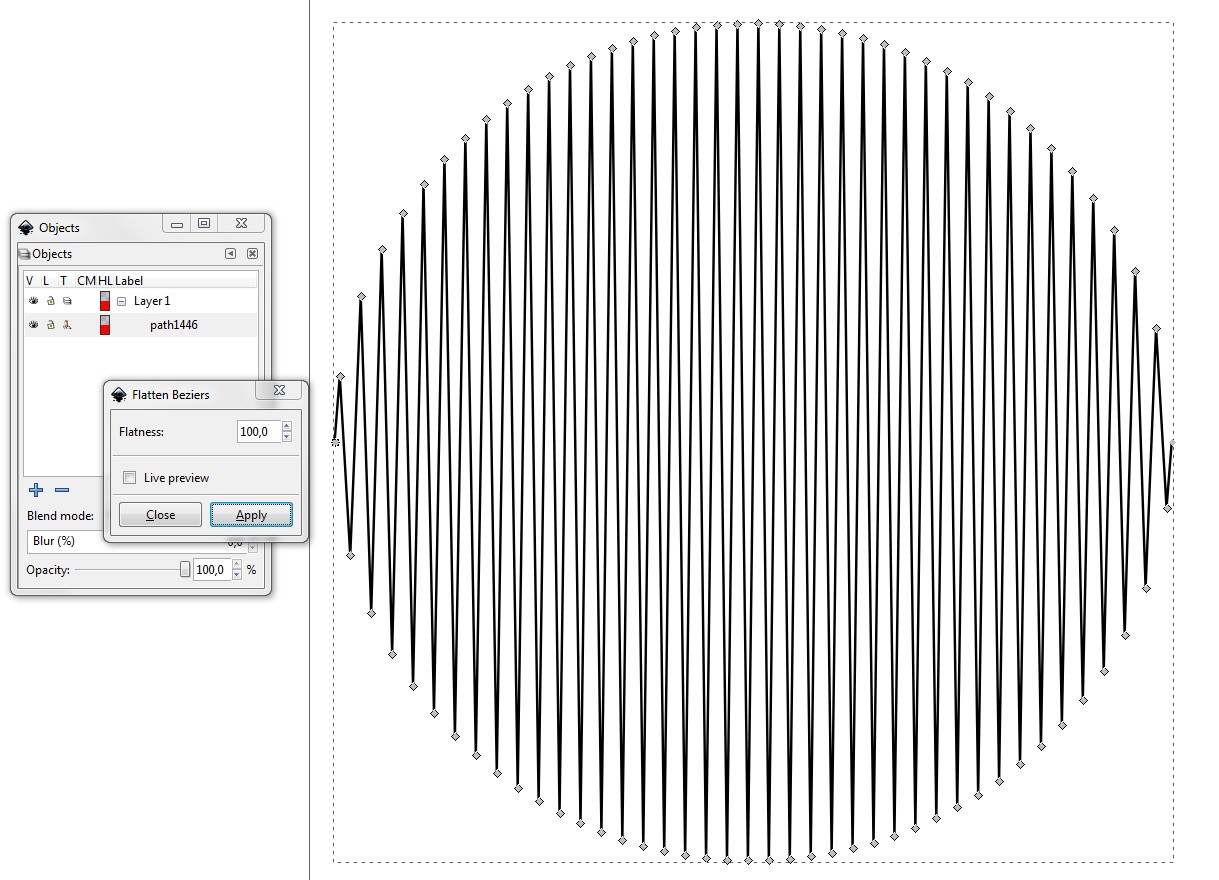 Save it as plain SVG to drop out all Inkscape’s own parts (there should be none because the result is a path, it has no functions).

I guess the function plotting method is not practical, so I try something else. If straight parallel lines are accepted fill (=no zigzag), one can tile a bunch of lines and either set a clipping mask or split the lines destructively with a shape

Inkscape has several ways to create a bunch of straight lines

The 3rd method is simplest. It generates the intermediate lines as a group:

The lines should be ungrouped and combined (Path > Combine) to keep them surely as one object. Groups are easily corrupted because their members can still be selected independently. In addition many path operations do not work with groups, they need a single paths or combined paths.

The next image shows the result when a shape is placed on the lines and Object > Clip > Set is applied:

The clipping can be taken back any time, the original parts are there intact, only partially hidden. There’s no way to snap anything to the apparent end of the line, because there’s no node. For this the lines must be split destructively or no clipping should be made. Snapping to path intersection works very well in Inkscape.

We can utilize the snapping by drawing the triangular zigzag with the pen: 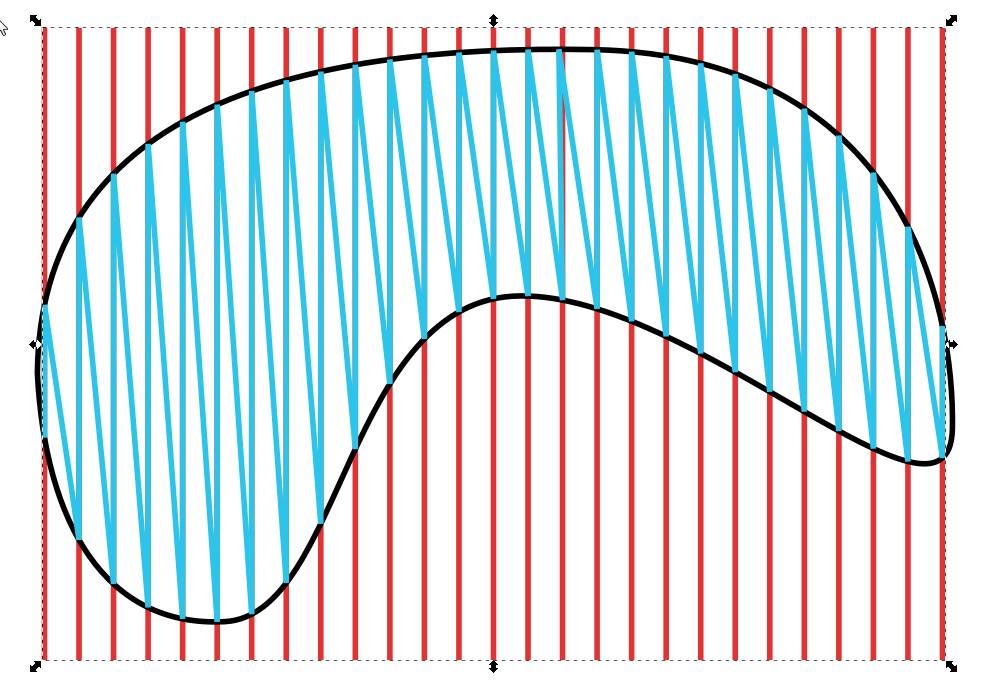 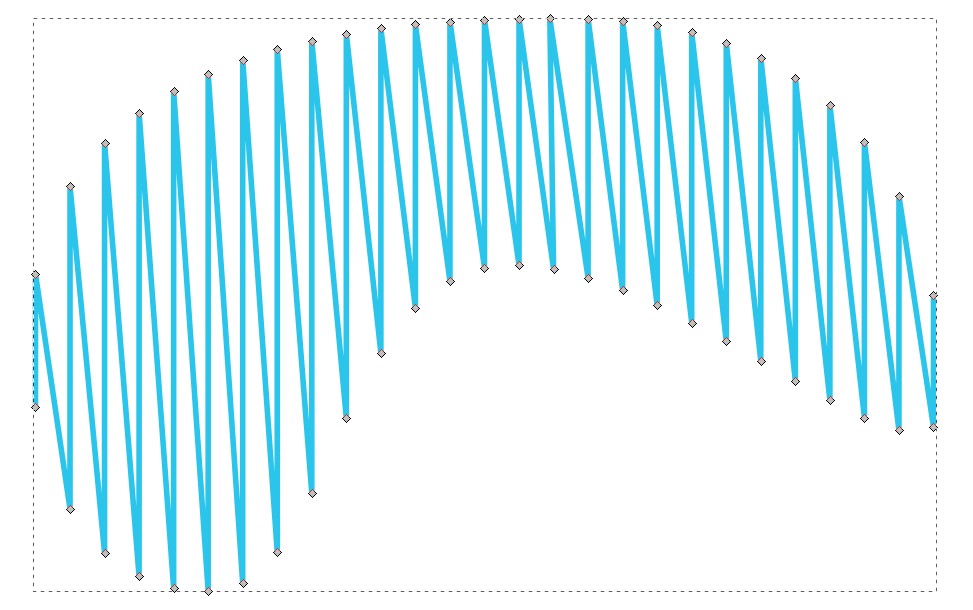 If it’s disturbing that half of the line segments s are vertical and the other half are tilted, it’s fixed by rotating the lines before drawing the zigzag.

A question arises “If one splits the lines for ex. with Path > Cut path, can the pieces be combined somehow automatically, not one by one, to a zigzag. In theory YES. But there are difficulties which make the result unsure.

At first we split the lines with the same black curve. A top shape really splits the underlying lines if they are combined (Path > Combine). The remnants can be selected and removed easily by using the normal selection tool in “select if touched”-mode (=Alt+Drag): 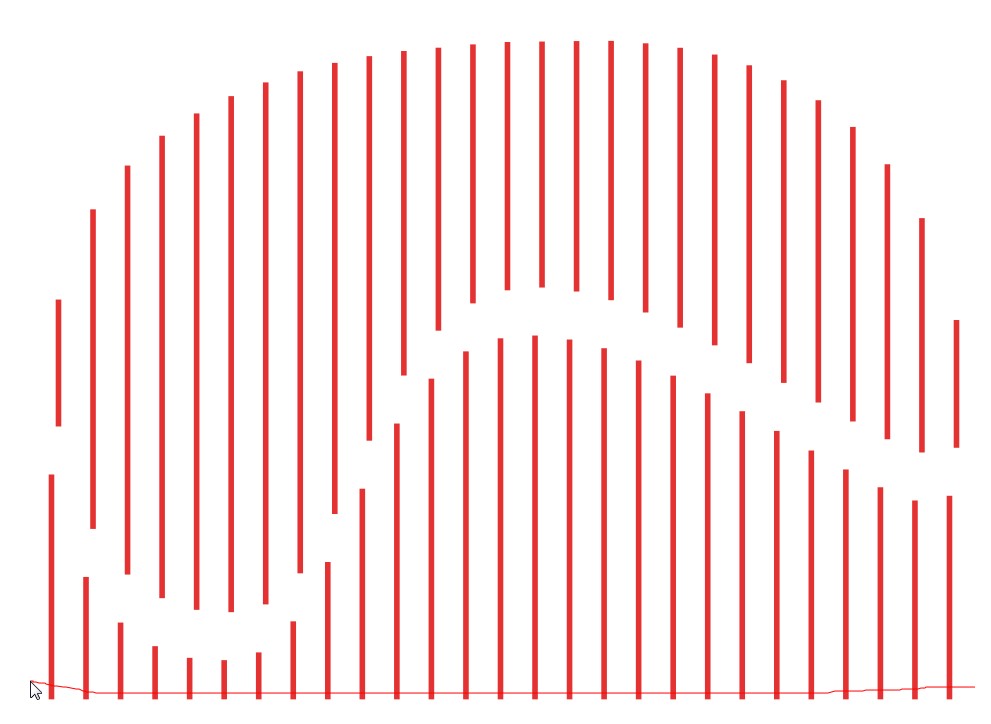 Then we can select the bottom end nodes of all lines and try node function Join selected nodes. The result is unfortunately unexpected: 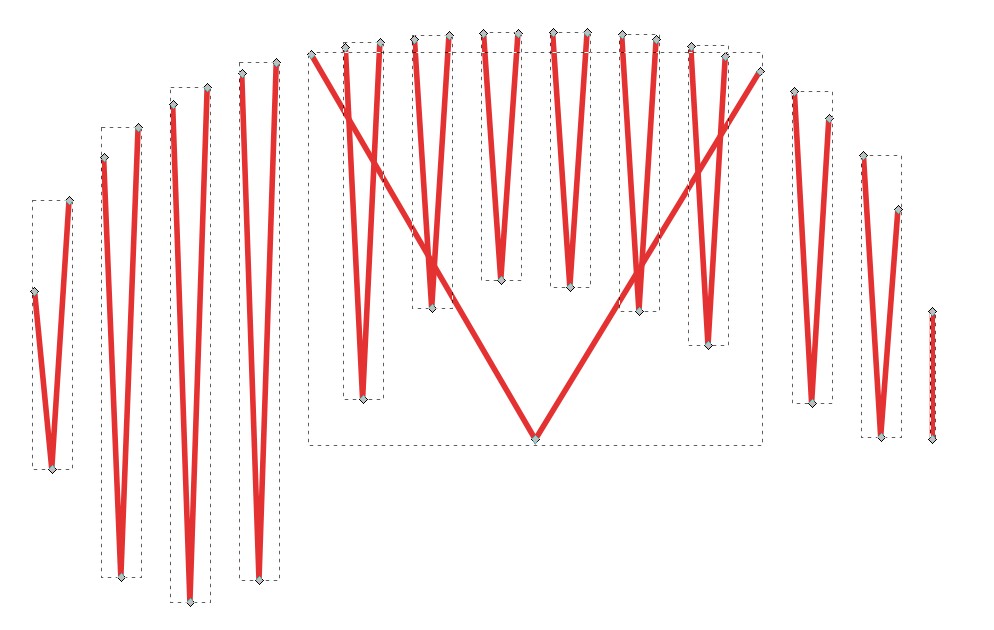 All node joining end connecting operations, when bunched, select the order unpredictably. The connections must be done one by one. Its much easier to draw the zigzag with the Pen as shown above.