I can create mockups on Photoshop and even apply simple Tween Animations to them but I can never get my GIFs to look like the example here.

What are Dribbblers using to create these animations?

Notice that the animations also include touch points and perfect motion. I would like to convert my Photoshop mockups to do the same.

How can I create an animated example of my mockups, similar to the ones created by Dribbblers?

Things you need to know to create something like this in After Effects:

How to make a Project and Compositions

When you start AE, you can press Cmd+N to create a new Project with one Composition inside it.

If you already have a Project open, pressing Cmd+N only creates a new Composition.

In this project, I used 2 compositions. GUI comp to hold the GUI and its animations. iphone comp to hold both, the background and GUI comp.

The second composition with GUI animations should be the same size as the screen, or at least have the same aspect ratio. Later, when you are going to place it on the screen, it might stretch to look odd if the aspect ratio is off.

After Effects has a pretty good system for importing .psd files, but I don’t like to use it because if you misplace, move or rename the .psd file, after effects can’t find it and you have to replace footage for every layer separately.

How to import images to a project

Right-click inside the Project panel on the left choose: Import > Multiple files

…or you can just drag files into that panel

I used slicy to export my images out of photoshop.

What objects should you save as separate image files

In this project I could’ve potentially saved the header and footer as one, but the header had a shadow that goes over the first button, so I had to save them separately.

Here’s a breakdown of how I saved my image files in photoshop before importing them to AE. 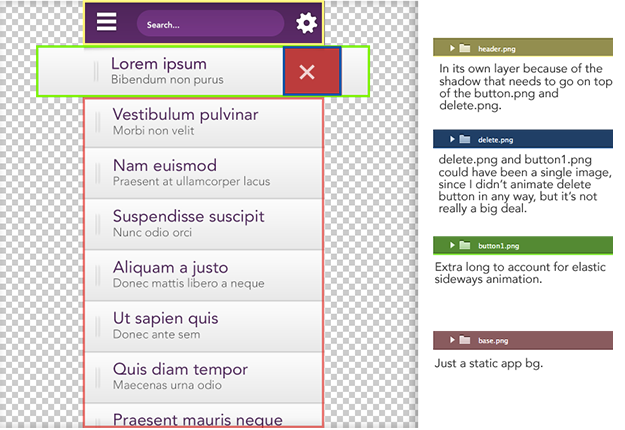 Move the keyframes closer to eachother to speedup the animation or further away from each other to slow it down.

Continuing animations after a pause.

a scenario: You’ve animated something from A to B and you want to pause for X amount of milliseconds and then move from B to C.

When you’ve animated B, go forward in the timeline and click the keyframe icon on the left side, here:

It should look greyed out, so don’t worry. That just means there is no keyframe in that position

Since keyframe #2 and the newly created keyframe #3 transform have the same values, there is now a pause between those two keyframes. Then you can continue animating normally, by moving forward in the timeline, and changing the values again.

I just wanted to take this time to tell you that all of them work just like position animations ( …minus the dragging ).

Just use the number sliders that show up when you press the hotkeys below.

Just select object(s) and press one of these hotkeys and start animating. If you don’t select anything, it reveals transform methods for each object in the comp.

How to slave objects to other objects

In the Comp panel you’ll notice a Parent dropdown list on every object.

You can use it to define a parent for an object.

If you then move the Parent, you’ll notice that the Child element now moves with it. Same goes for animations that you attach to the Parent element.

If you animate Parent object to rotate, the Child will follow…

Adding elasticity to your animation

So maybe you noticed that the button animation doesn’t stop to a wall, instead it stops in a very elastic way.

After Effect Expressions can be used to achieve this ( It can do a lot more as well ).

To apply Expression script to an animation, Alt+{mouse click} the stopwatch and paste in the script.

The Expression I used in my button animation

The first 3 variables amp, freq, decay can be edited to get different results out of it.

You can apply this same script to movement based animations. For example, opacity animation is not affected.

Can also be found in here.

So this is another thing that can make the animation seem a lot less linear, just like the Expression script above.

I used Ease Ease in that “touch indicator circle” to make it look at bit more human like movement.

You can select one or multiple keyframes and right-click one of them.

I often use Easy ease, because I’m lazy…

Here’s a simple position animation demonstrating how easing and this particular expression script can have a huge impact on the animation.

Placing animated comp/footage into a screen

So after the GUI is animated, it’s time to place it on the screen of the device.

AE doesn’t have native method for doing this, but do not worry, there are ways.

I prefer to do this:

It’s honestly not that bad…

Exporting as a video file

So even though the above method shows you how to export a lossless file, it’s not the way you should export video files.

How to replace footage

So AE can’t find your files? Do this:

The project files can be found here.