I’m having a confusion on how to represent properly the strands of a rope when trying to make a knot tied to one corner of a square.

I was able to reproduce a shape similar to a knot tied to a small hole in the square but I don’t know how to make a texture or something akin to the strands you see in a rope. Does it exist a model or a way to do it without much fuss?. Can someone help me with this?.

The figure from below is what I could made but as it is shown the background which I could obtain is entirely a flat color and not the sort of texture which you can have with the threads. 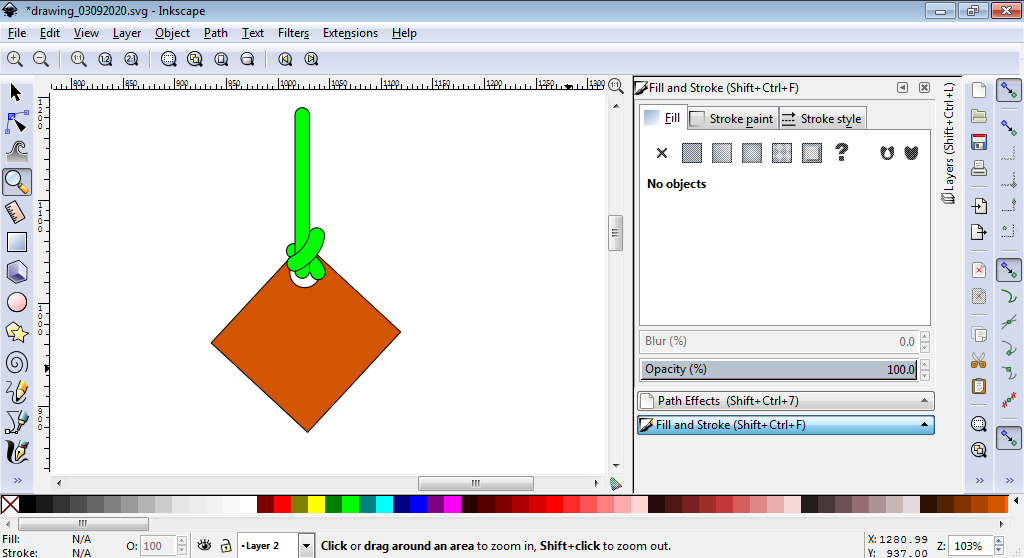 In my research to find a model as a guide I could obtain these: 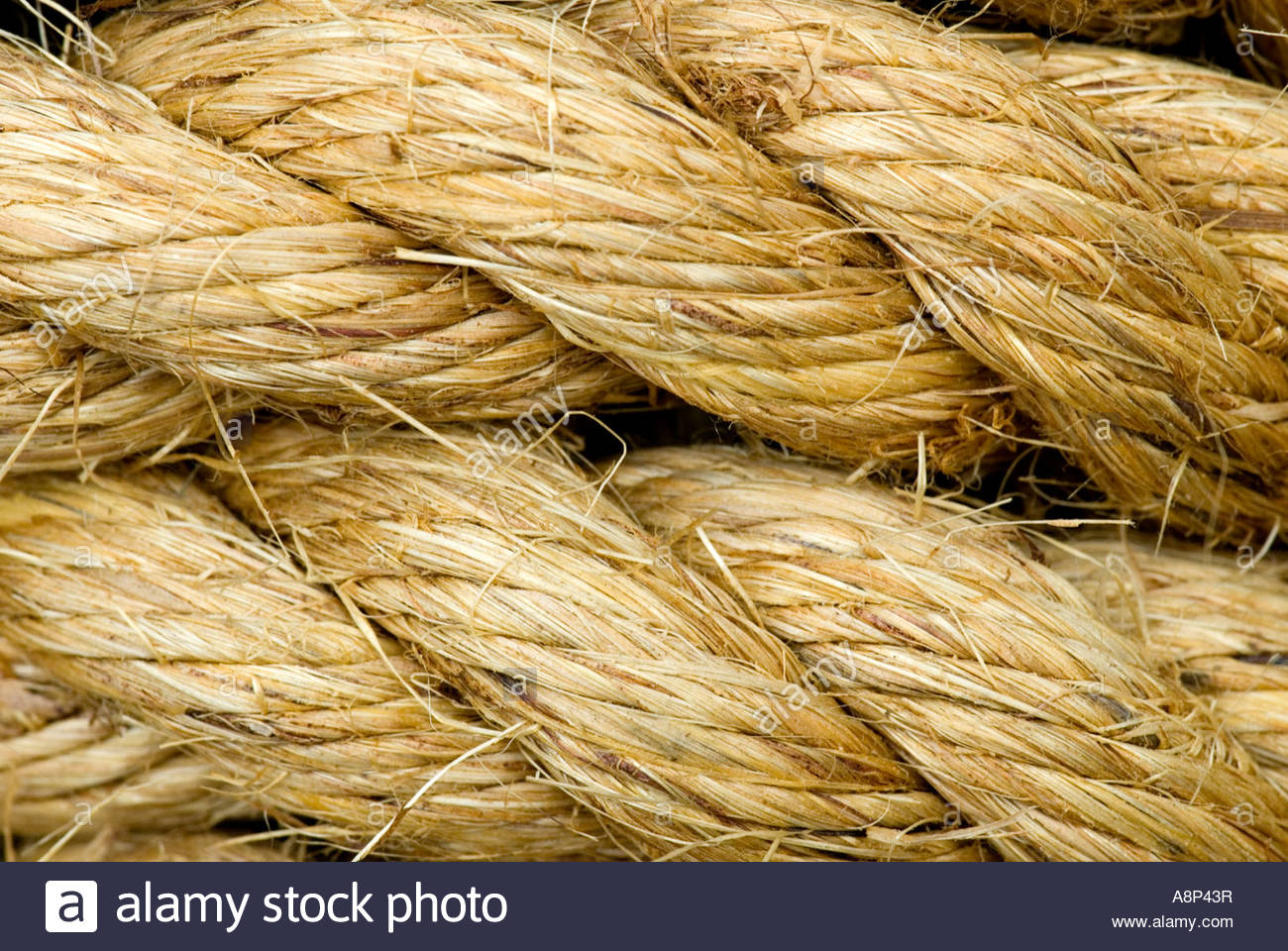 This is a sample of the cotton rope 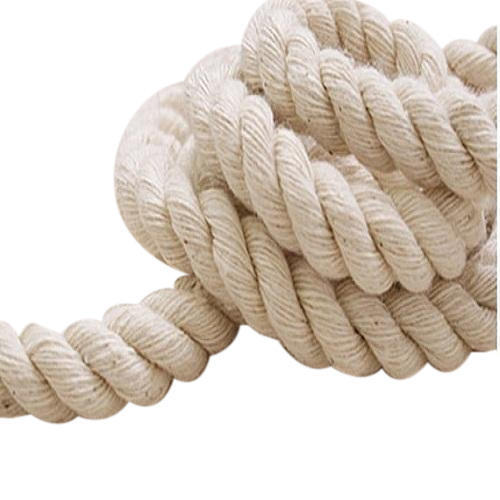 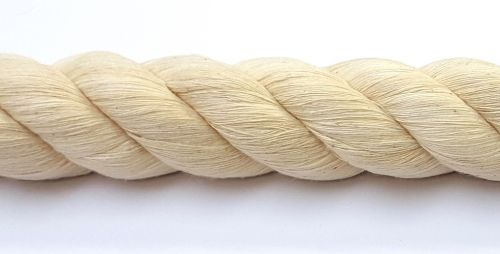 However the model which I intend to reproduce isn’t exactly a hemp rope but a cotton rope, so the yarns don’t stick out from the overall surface in a random manner. I’m aiming at something more smooth.

So does it exist a way to add this effect or how should I draw it?. Can someone help me with a step by step indications so its easy to follow?. I’m stuck with this.

I guess you expect something like this (it’s from Illustrator) 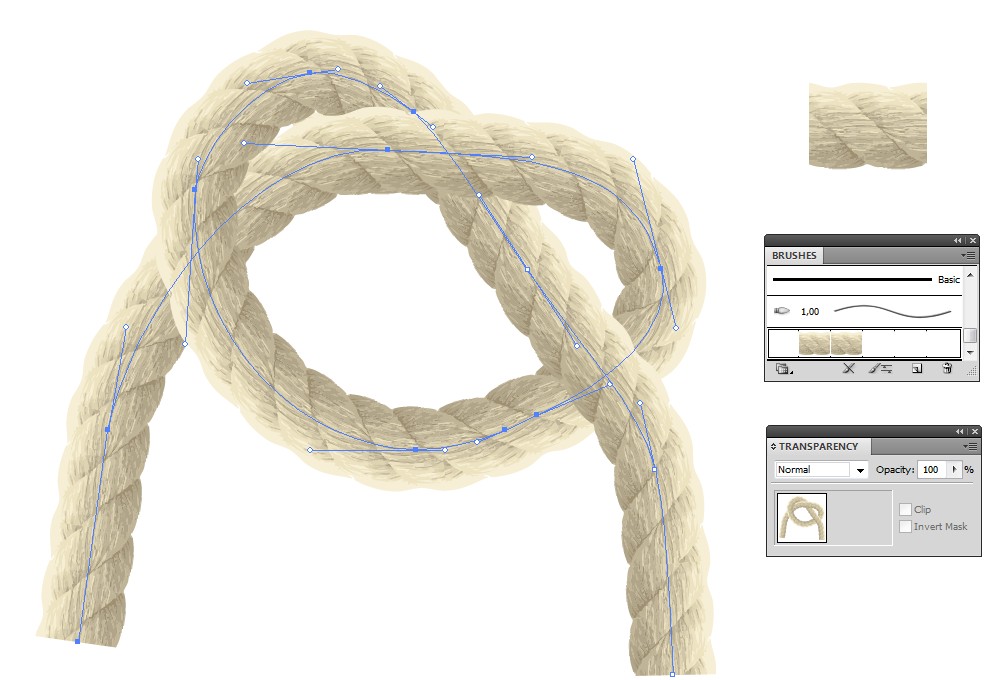 It’s full vector. A piece of rope (see it in top right) is used as a brush. The piece is a traced photo. It’s vector, not a bitmap image. It’s a piece taken from one of your rope examples and prepared in Photoshop to make seamless repeating possible. The prepared piece is pasted to Illustrator, traced to vector and defined to be a Pattern Brush. That brush is applied to drawn curves.

Actually recent Illustrator versions and at least Affinity Designer allow also bitmap images to be used as brushes. That reduces the computer load substantially. The traced piece contains hundreds of small objects even when traced only to 8 colors.

The result really resembles rope except the shadow follows the bearing of the curve. It’s not any realistic light condition. The photo for this purpose should have symmetric light.

Unfortunately I must tell that the same idea isn’t usable in Inkscape. There’s pattern along a path, but it doesn’t allow shapes this complex. Bitmap image also cannot be used as a brush. The simple non-shaded version that you can find in tutorials is what’s easily available.

One workaround would be to place different patterns along copies of the same path and prepare the patterns so that together they make an usable shading. That’s extremely complex if there should be also fibers on strands. I skip it.

A plastic looking rope version with single hue color and no fibers is quite easy to derive from the simple non-shaded version of common tutorials which are based on pattern along a path. It’s like this:

It’s like taken from a cartoon, absolutely non-realistic. Its actually 3 versions layered: 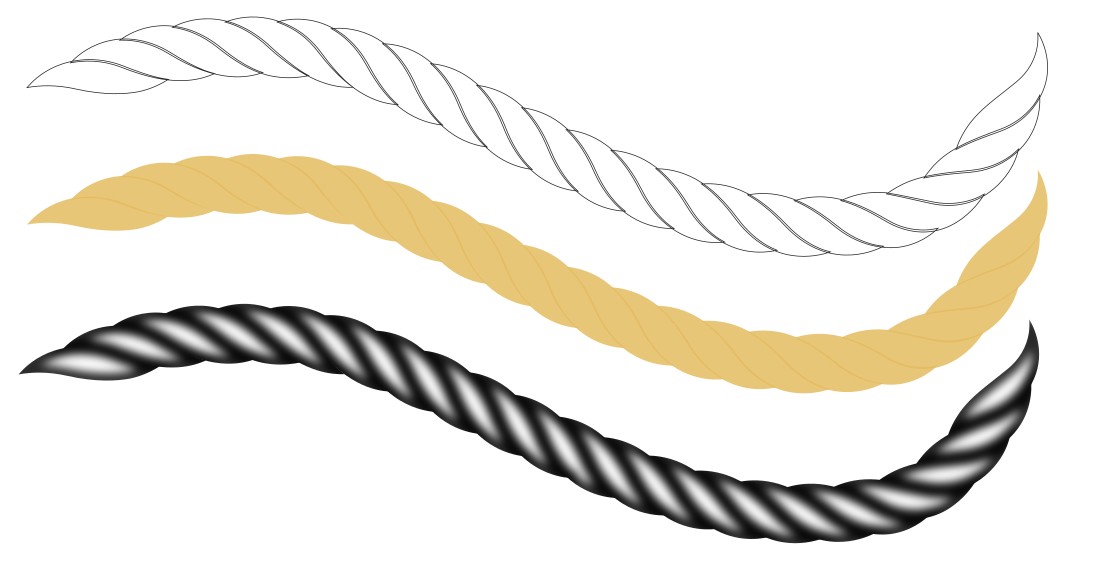 On top there’s a thin black stroke to make it look solid. Without it it’s blurry.

In the middle there’s a colorization layer with blending mode Hard Light.

On the bottom there’s a heavily blurred version with thick black stroke and white fill. It’s clipped to hide the out-of-the-shape blur. In the next image the BW-version is shown without clipping (clipping path = the same as the colorizing version) and without blur:

Hopefully you get an useful answer for realistic rope from someone with deeper knowledge. A hint: Try to accept some of the answers that you have got in the past. Some of them are so fine that I would never write & draw anything comparable. I guess it will reduce the obvious unwillingness to write answers to your questions.