Consider directed graphs. We call a node v superstar if and only if no other node can be reached from it, but all other nodes have an edge to v. Formally:

with n the number of nodes in the graph. For example, in the below graph, the unfilled node is a superstar (and the other nodes are not). 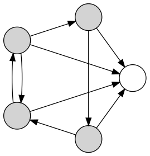 How can you identify all superstars in a directed graphs in O(n) time? A suitable graph representation can be chosen from the usual candidates; please refrain from using representations that move the problem’s complexity to preprocessing.

No assumptions regarding density can be made. We don’t assume the graph contains a superstar; if there is none, the algorithm should recognize it.

We can eliminate all but one of the vertices by checking for the existence of n−1 edges because we can eliminate one possibility for each edge we check. In particular, if there is an edge going from x to y, we eliminate x and move on to y (as another vertex can be reached from it); if not, we eliminate y (as it cannot be reached from x). Once we reach the last vertex, whichever vertex is not eliminated should be compared with each other vertex (ensure the superstar condition is upheld: there is an edge incoming but not outgoing) until it is eliminated or confirmed as the superstar. Some pseudocode:

Let’s walk through an example to illustrate the method. Take this array, with the source vertex on the top and destination on the side. 1 indicates an edge:

I’ll grey out the vertices we have ruled out as potential superstars.
I’ll use green and red to indicate the edges we are looking at when they do and do not contain the edge we’re looking for, and blue to indicate where we have already looked.

We start by looking at vertices 1 and 2.

We see there is no such edge, so we eliminate 1 and take 3 as our current
vertex. Recall that we have eliminated 2 already, so see whether there is an edge from 4 to 3:

There is an edge from 4 to 3, so we eliminate 4. At this point we have
eliminated all but one of the vertices (3), so check out its edges and see whether it qualifies:

There is an edge from 1 to 3 but not the reverse, so 3 is still a candidate.

There is also an edge from 2 to 3 but not the reverse, so 3 is still a candidate.

There is an edge from 4 to 3 but not 3 to 4; that completes our check of 3’s edges and we have found that it is, in fact, a superstar.

Since we eliminate one vertex as a possible superstar on each of the first
n−1 edge checks, the best case is that the nth check eliminates the
final vertex for a complexity of n. In the worst case (the last or
second-to-last vertex is a superstar, or the final check disqualifies it), after the first n−1 comparisons we compare the candidate
with 2×(n−1) more vertices, for a worst case complexity of 3n−3 (O(n)). So, this algorithm is
Θ(n).