I’m working on a website that will, on some pages, display the city names and IATA codes of airports. 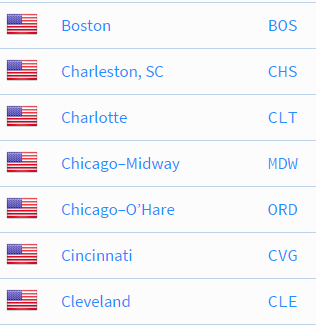 However, some cities have multiple commercial airports, and require an airport name as well. (For example, in the screenshot above, Midway and O’Hare are two different airports that are both in Chicago.) I’m trying to figure out the best way to append the airport name onto the city when clarification is necessary.

So there are clearly a lot of ways that airport names have been appended to cities. Is there a correct way?

This is just my point of view so treat it accordingly.

I don’t think there’s a correct as in “by the book” way of doing this, and my approach is to see which of the options is easiest to understand and takes less time to figure out or search through.

I used your image to create and visualize all four of your options and the one that stood up visually was the Parentheses.

It’s clean and it’s easy to figure out, therefore my bet is on this: 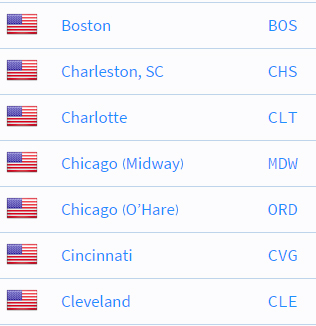 Just now I saw the comment by @go-meek and he has a good point when he says “and will not be confusing if you ever need to use it with a city name that already has an em dash.” , though I would not agree with combining the airports in a single line since all airports have a different IATA code and this would generate another problem.