To clarify, in the picture below (I’m making a texture where the text should be center-aligned on multiples of 32) the green dotted lines are my grid and magenta lines/numbers are PS trying to snap to other objects when I move “SEP”. Due to inconsistencies in letter height of this font, trying to align to the edges of other text elements in that row are not always precise, and now instead of snapping to a single point (the center gridline), it’s trying to snap to bottom alignment, top alignment, and all sorts of other messy places. 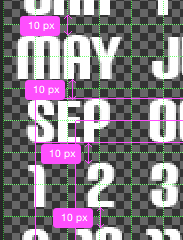 Found out what I needed to do! The culprit is Adobe’s so-called “Smart Guides”; they do not have an option in the View > Snap menu, which is why I went around and around for hours without figuring out a way to disable them.

I hit up Google again today, and eventually discovered that the offending feature was called “Smart Guides”, so I turned around and plugged that into my query and after trawling through a bunch of posts that ended up being complaints about Frame Edge highlighting in InDesign and other Adobe apps, I finally came across this SU answer.

Navigated through the menu to View > Show > Smart Guides … uncheck that, and PRESTO, no “smart” guides, no more elements trying to snap to other elements I don’t want them snapping to!