If I don’t have “double linebreaks” between paragraphs, the A4 document automatically looks like a compact, uninviting wall of text. Even if I indent each paragraph, it still looks way too compact to my eyes.

Yes, I realize that the book I’m reading right now, and the previous one, and probably just about any book uses the “spaceless paragraph” style, and probably for good reasons as the book would be much thicker if they had a space between each.

I guess that’s why indentation was created in the first place.

However, as I just established, it looks too compact and uninviting for a text I have written and which I want other, normal people to read. So, naturally, I use “double” linebreaks between paragraphs:

Even when I have the “air” between paragraphs, I still use indentation. Is this considered silly/ugly? Even though I justify the text, it looks a bit too “blocky” without the indentation.

Frankly, I wish I had never started caring about this, because now it’s become an obsession and I simply don’t know how to format my documents/texts anymore. I fear that the answers will all push their own “agenda”, and that there is virtually zero agreement among scholars/designers/typographers.

I basically want to know how stupid I will look for using both indentation and “air” between paragraphs.

This is certainly a subject with many cultural and individual differences. I have a set of rules which guides me through the days, but I often see nice typography breaking those same rules. I’ll give you my thoughts about this subject, but take it for what it’s worth. (The examples are just quick sketches, don’t pay too much attention to the aesthetics.)

Every design detail must have a function

I’ve been taught that everything you add to a design must have some function and serve to solve some kind of problem (in the widest sense).

We use periods and capital letters to create a mark between sentences. If sentences just come in one continuous stream it makes a long text unbearable to get through: 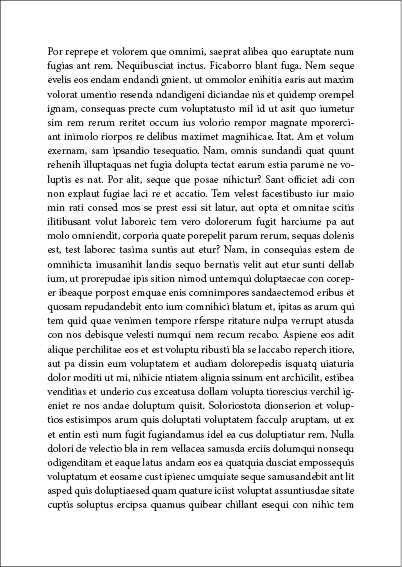 We add line breaks to break up the text into paragraphs: 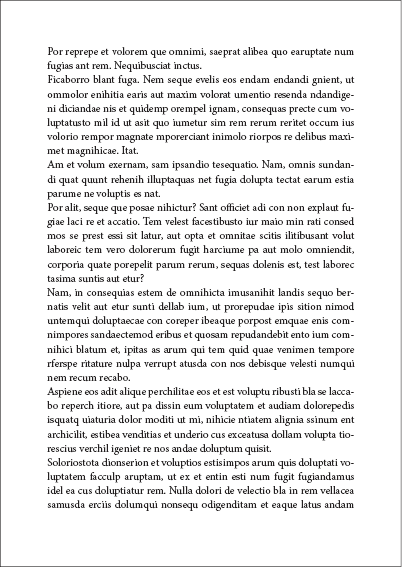 So now we both have a line break and a capital letter, but it’s still not quite enough to ensure a pleasant reading experience because we need to look at the right side of the column to find where to continue reading in the left side. Some last lines of paragraphs might even take up the entire line making them impossible to spot. We need to add one more marker. We can either create indents: 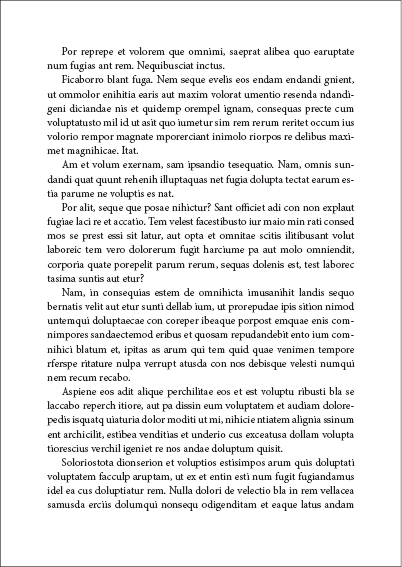 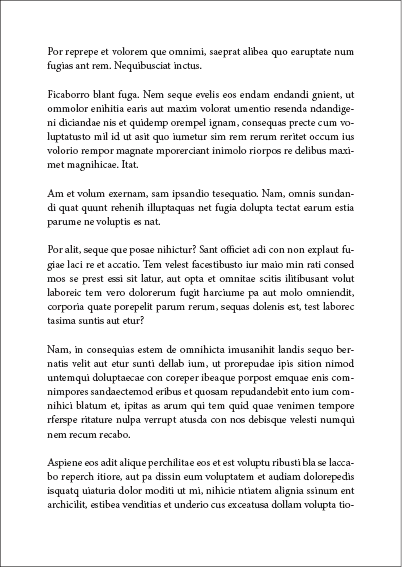 If we create both we have, in my opinion, created one too many paragraph marker. Seems a bit like pointing two arrows towards the same object when one would be enough: 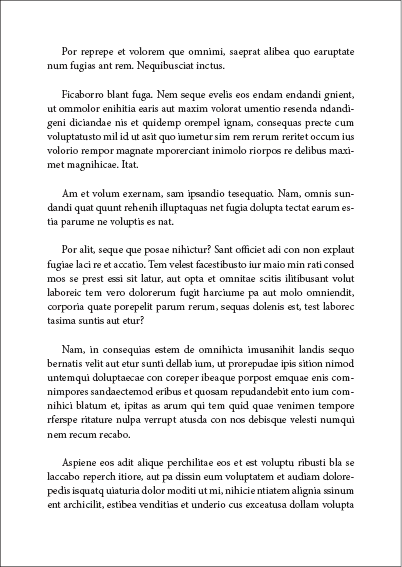 The same logic dictates not having an indent on the very first paragraph following a header. It’s simply not necessary for the reader to be able to find where the text begins. (I admit seeing many exceptions to this rule.)

Double line-breaks (or rather having the same space between paragraphs as the leading) can be quite annoying to work with, in my experience. Firstly because it can make the text seem quite fragmented and secondly because it can be difficult to obtain balanced columns because the empty lines get in the way. Constantly they end up in the bottom of columns or they align across columns making confusing gaps in the design: 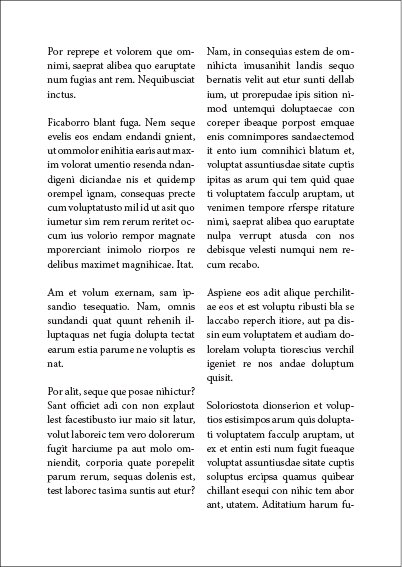 Books and multi-column magazines must use a baseline grid

In some documents, like advertisement flyers or reports with many headers, bulleted lists, tables etc., you can use any space between headers and paragraphs that works: 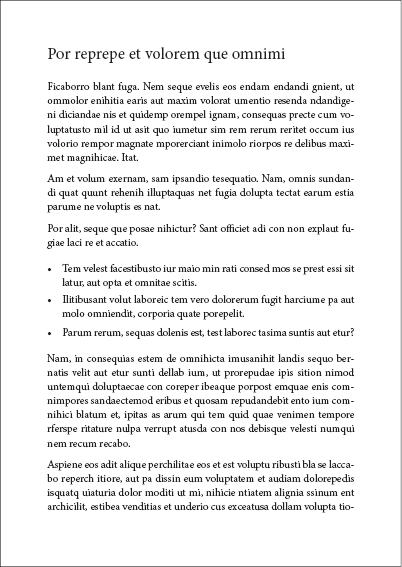 In books (particularly novels), multi-column magazines, and all documents where you see multiple columns of text side by side, I strongly recommend letting all styles relate to a baseline grid or you will end up with a very noisy and unbalanced look: 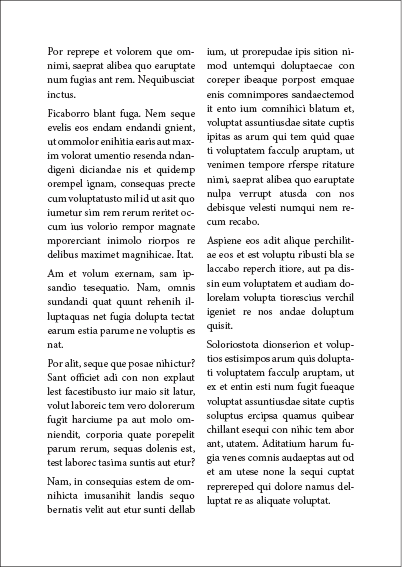 With a baseline grid you only have the choice between no space or any number of empty lines. Smaller space is not a possibility.

A thing that often happens when a design uses double line-breaks is that the headers don’t get enough space. I often see headers with no space at all: 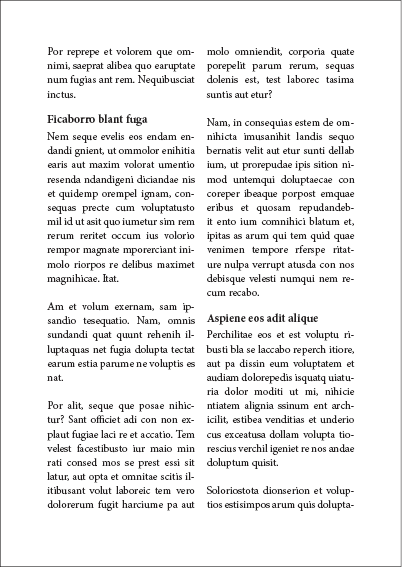 or just a single line like between the paragraphs: 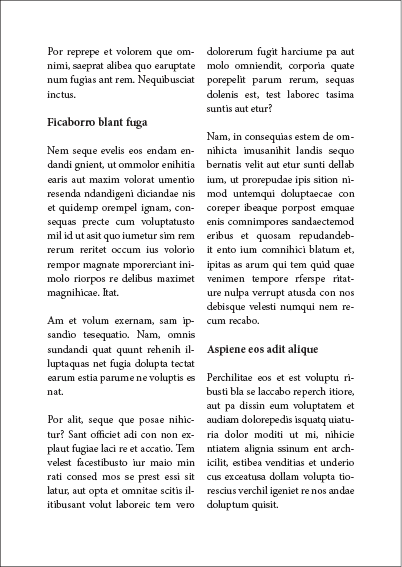 This is bad according to Gestalt psychology because it gives the impression that the header only belongs to the first paragraph or floats in the middle of nowhere. 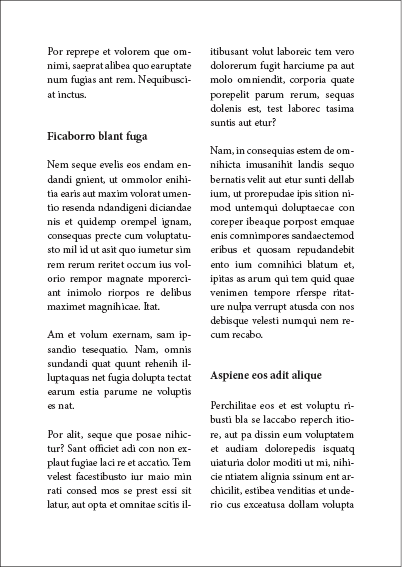 This perhaps also provokes a wider gutter between the columns (to guide the readers’ eyes) and it all starts to get pretty airy.