I am trying to create a shared album in iCloud, containing about 750 photos and 50 short videos.

Using Photos both on iOS 9 and El Capitan, the process of adding the photos to the album is extremely slow.

On iOS, when I try to share the photos I am shown a modal “preparing” dialogue that doesn’t seem to progress.

On my Mac (which does not have “Optimize Storage” enabled) the sharing progress bar fills slowly, then stays mostly filled for a very very long time, while heavily using the CPU.

Given the amount of network traffic that is caused by the request, I assume that Photos is trying to download/re-upload each image.

Given that the photos are already stored on iCloud, I would expect to be able to share the photos instantly, as I can do with Google Photos.

Is this the expected behaviour or am I suffering from an abnormal issue? 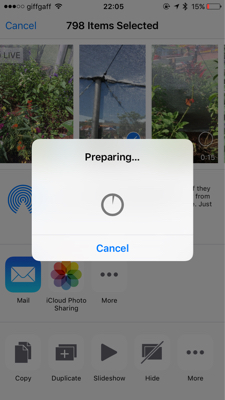 Adding one photo to a new shared album works ok, but as I add more photos in one go the time taken scales up quickly.

What happens during the Preparing step is Photos first downloads all the photos/videos being shared (so this step can be skipped on a device that holds full-resolution copies of your photos). You also see this step when trying to share a photo by email or iMessage, with Optimize Storage enabled.

Then it will downsample photos to 2048 pixels on the long edge (5400 pixels for panoramas), and videos to 720p. This step takes place locally, consumes a lot of CPU power, and may take a very long time, particularly with videos. That would explain why you can share a single photo fairly quickly, but then the progress indicator seems stuck once you select everything. I’m almost positive it’s your videos incurring this extra processing time.

Finally, Photos will re-upload everything to a separate iCloud server, which is exempt from your storage quota. However, each shared album is limited to 5000 photos/videos combined, with videos themselves limited to 5 minutes long.

Do note that these steps appear to occur asynchronously. However you’ll still ultimately be bottlenecked by either your CPU or Internet upload speed.

I would advise you to do this from your Mac, if possible. Not only can you leave it plugged in overnight, prevent it from sleeping, and continue using it while it’s doing its thing, the resampling step should be much faster with your Mac’s CPU than with your iPhone’s (generally speaking).