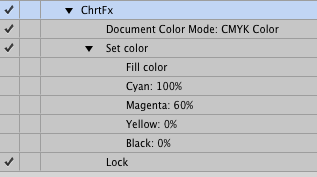 That should be the end of it. However, these steps repeat themselves a second time.

You can see the repeat above and the resulting error for the Lock step
(since it’s already been run and nothing is then selected).

I did have a couple additional action steps – save and close. But due to the repeat those steps wreaked havoc if multiple AI files were open at the same time. Often crashing the app entirely. So, I whittled this down to the minimum and thats when I saw the actual issue was due an undesired repeat.

I’m pulling my hair out as to why the action repeats itself. I’m trying to do away with the error message for the lock step.

Any ideas why an Action would just decide to repeat itself?

The “repeat” appears to be due a shortcut conflict.

If the Action is run by clicking the play button at the bottom of the Actions Panel, then the repeat does not occur. The action only repeats when using a shortcut, designated in the Action Options: 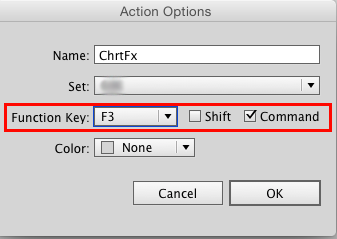 To solve this, ensure the shortcut assigned does not conflict with any other usage for the entire operating system. If the Action’s assigned shortcut conflicts, the action seems to repeat.

Hunting down the actual conflict can be a quest in itself.

Most of the F keys within Illustrator are used for the Window menu shortcuts (Edit > Keyboard Shortcuts > Menus) … but the conflict can extend across the entire OS, at least here. In most instances the OS shortcut is called first (but may not actually run because Illustrator is the foreground application), then Illustrator sees the call. So, you get essentially a double-call when using the shortcut if there is a conflict.