I’ve been trying to figure this out for a while and can’t seem to get it. So, I thought it might be a good idea to ask here. I am having an issue with overlapping objects after applying appearance (stroke/fill).

I am designing a map in Illustrator and have created some Graphic Styles that will be replicated throughout the map. The way I have been working has been to group all paths that will retain a specific graphic style. Then, I apply the style to the entire group.

This has been working great for the most part unless the objects inside the group overlap each other. Here’s my workflow: 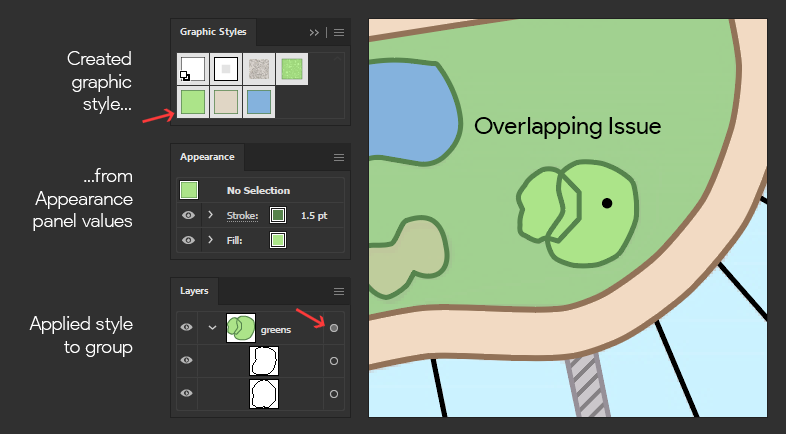 I have tried opening the Opacity sub-panel under the Appearance panel and checked the box Knockout Group which says “Prevents the elements of a group showing through each other”. But this doesn’t seem to do anything and the elements are still showing through.

I know I can apply my style per path/object, but this will be much more time consuming and defeats the purpose of styling everything inside the group as the same. Is there any way to achieve what I am trying to do with groups?

There are 2 kinds of them:

There’s no way to tell the difference, until the style is applied — and then viewing the results.

Applying an object-level style to a group will always result in unexpected appearances. You’ve encountered one such issue.

Knockout won’t work because the appearance is at the group level and a group won’t knockout out of itself. Groups are seen as one object… there’s nothing to knockout.

In short, object level graphic styles rarely work well on groups. You might simply be able to update the style with the stroke below the fill and that may work in some instances.

To get around this in general, don’t group the objects. Select them, apply the style, then group the objects. Or if you prefer to Group as you work… when you’re ready to apply styles… Ungroup, apply style (it is possible to apply an object-level style to multiple selected objects – no need to select anything individually), then Group again.

Addendum: Applying a Group-level style to an object often results in no appearance change or an unexpected appearance. Most often no appearance because there’s no “group” present.