This is what I am trying to do: 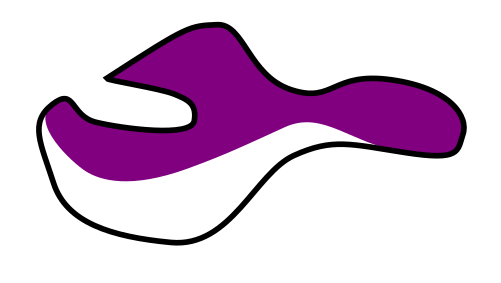 So essentially, there’s a path (the filled one) that repeats another path (the outlined one) perfectly on some, but not all, range. This example I did by creating a “fill” with exclusion method, and then editing the resulting fill, but I thought that maybe there’s a method that would accomplish what I need quicker and simpler? I was thinking, perhaps some “snapping” technique that that snaps a path against path instead of a node against node? Or maybe a method that copies a section of one path into another?

In your example case the edited duplicate has a fill, but hasn’t a stroke.

For example add 2 new nodes where you want the exact match to stop. You can at these points split the path, delete the unwanted portion, draw a new and join the parts.

As well you can edit the path with the node tool, no need to delete a part. The added nodes are your guards who keep all edits out of the exact match area.

GN = inserted guard nodes (actually only one was inserted, the other was already in a good place in the original shape)

You may have a bigger shape which has just the wanted edge and you may want to use that edge as the separation line. An example:

I do not recommend to use clipping instead of intersection. It’s easy to think that intersection shouldn’t be used, because it’s destructive. Clipping with a mask (Object > Clip > Set) creates the same looking result, but the clip can be released and the shapes are restored – this is the common thinking.

In Inkscape it’s not true. The result really looks the same, but when one releases the clip, the shapes come back differently:

The orange shape (=the clipping mask) has lost its form.

NOTE: I do not know if this is a bug in the software or my system malfunction or do I have wrong software version for my system. I use Inkscape 0.92.2 portable in a 64bit system which can be a wrong selection.