I am preparing an A5 flyer for print using a printing company that my client requested.

The doc will be 5 colours as there is a Pantone spot colour in there too.

In the artwork checklist provided by the printers, it states the following:

Instructions for special colours: To avoid mottled or patchy colours,
areas with another process colour (CMYK) overlaying a special colour
should be created using knockout rather than overprinting. Likewise,
special colours over a CMYK colour should be knocked out.

Does this mean I have to modify something in InDesign or will it do it by itself?

I have been playing about to get more familiar with how it all works, and have gone to Window > Output > Attributes to bring up the respective panel which of course shows the Overprint Fill checkbox.

My bottom-most layer in the document is Pantone 333 C and then everything on top of that is CMYK. I find that everything I draw on top of it has an unselected Overprint Fill checkbox associated with it.

However, when I enter some text into a textbox and then Create Outlines I see that Overprint Fill becomes checked for these objects.

The wierd thing is, before I click Create Outlines the Overprint Fill checkbox appears unchecked… and I’ve been sure to select the T in the swatches panel to be sure that it is referring to the text colour and not the colour of the text box itself.

Is this something I don’t really need to worry about as InDesign will handle itself? Or may I need to modify any overprint settings before preparing the doc for print? 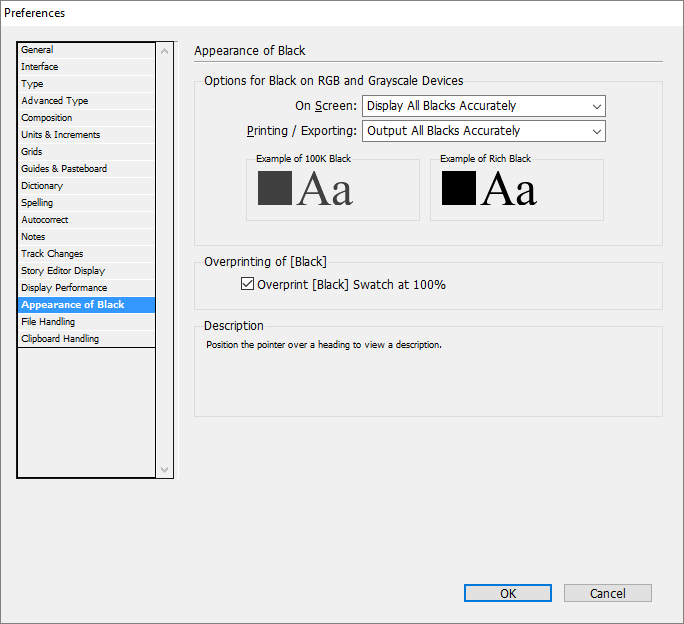 Furthermore, make sure Overprinting of [Black] at 100% is checked.

The color swatch [Black] has a special role in CMYK printing as being the ink most commonly used for small text. When you print text on top of a colored surface you don’t want the text to knockout the underlying layer, because it is almost impossible to perfectly align the CMYK colors. The result could be something like this:

For that reason it is common to always overprint black text. In InDesign, everywhere you use [Black] it overprints (if set in preferences). If you want a black swatch that doesn’t overprint you can just make a 100% black swatch which should behave differently than [Black]. Also if you set the tint lower than 100% it won’t overprint.

Knockout is used by every other color and all objects by default. It just means that the objects covers what lies behind it. Like having a white clone of the object lying underneath so the background doesn’t shine through.

To instead make an object mix with the background you can use Attributes/Overprint Fill (which btw only applies to objects – not swatches) or, as I do, just change the blend mode to Multiply.

You should always check your work in “Window/Output/Separations Preview” (RGB objects and images will be shown as if converted to document CMYK). Here you can turn the inks on and off to check all sorts of stuff. 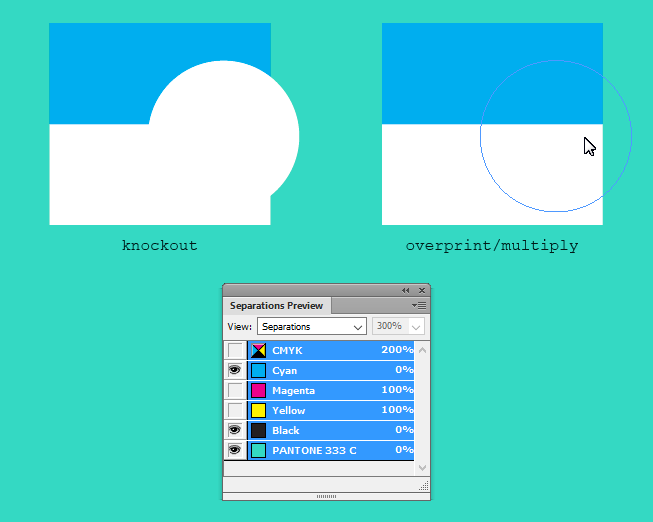 As you discovered yourself, all objects (except Black) are knocked out by default (I can’t explain the Create Outlines case). So if you can’t see any spot where the Pantone color mixes with a CMYK color, you are doing as the printers asked. (I would still let black text overprint on top of the pantone color for a cleaner result, but i would tell the printers).

(When the printers advice against the pantone color overprinting CMYK and vice versa it is probably because they are worried the total ink will become too high. For coated paper the limit is normally around 300% (in Europe) and for uncoated a little lower – ask the printers if it is an issue. If you overprint a color (pantone or not) on CMYK images you risk manually overriding the maximum total ink of the color profile. You can keep an eye on this issue using Separations Preview/View/Ink Limit, but you will have to know which limit to aim at.)