On a symmetrical path, I’d like to adjust two nodes while maintaining the symmetry. 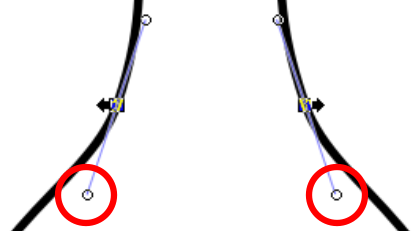 I understand I can move the nodes horizontally using < and shift-< using the center point as the symmetry point of a scaling operation. What if I want to adjust the handles only (changing the angle or the length)?

In this method you will draw half of the path, clone it, flip the clone, place it next to each other and join the 2 paths to form the symmetric shape (the instructions below looks like this is a very tedious thing to do, but it isn’t, hence this straight forward summary)

In this method you will divide the existing path into 2, delete one half, clone the other half, flip it, place it next to each other, make edits and finally join them together.

This method is not so straight forward as the one above but it deals with positioning the handles as desired.

In this method the handle of one node is altered, then it’s position is identified from the centre(a common point for both the side of the symmetric shape) then the same position is plotted on the other side using guides and a lines.