Sorry to have to add to the bajillion questions about freeing up space on an iPhone, but I can’t seem to find one that addresses my particular need.

I just bought a new iPhone 12 Mini with 128Gb storage, and “oops”, apparently my old iPhone 8 had 256Gb. No problem, I thought, it’s only about half full anyway, I’ll just delete stuff until I’m under whatever nebulous threshold it needs. There’s always some cruft hanging around to delete, I figured.

Well, apparently the vast majority of space on my phone is taken up by photos: 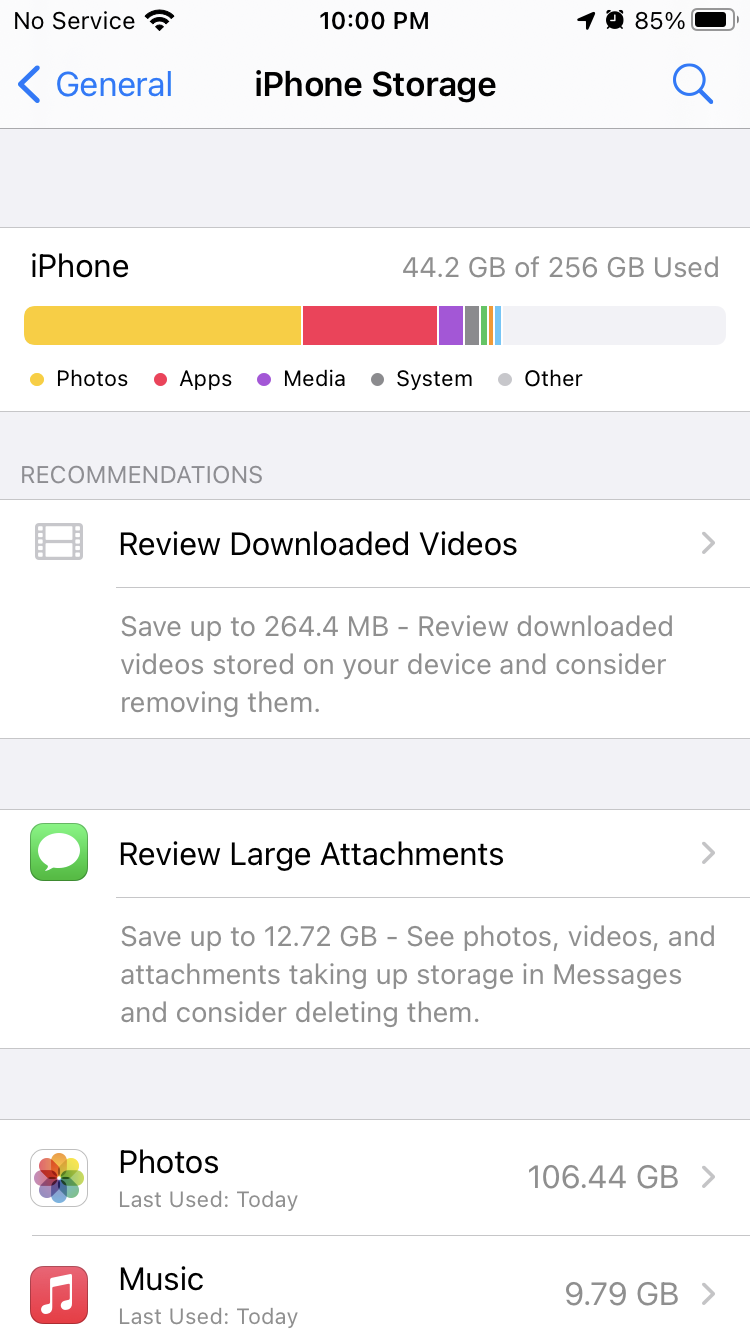 (Note some oddities – “Photos” takes up 106Gb, but everything altogether takes up 44Gb; and the sizing bar shows distinctly more than 50% of storage used, despite being nominally 44Gb.)

If I go in and delete individual photos/movies from the Photos app, then they get removed from everywhere (I have iCloud sync turned on), so I don’t want that. Not that I can identify particularly large photos/movies very easily anyway….

With iCloud sync turned on, it seems to do a decent job of keeping disk usage below the limits of my current device (presumably through offloading items to iCloud), but I need it to keep usage quite a bit less than that, so I can complete the transfer to my new phone. After that, presumably it will manage things properly on the new device.

I thought I was working toward a solution, but now it seems to be stuck at a worse point. I disabled iCloud Photo sync, then (after waiting a while) my new phone seemed happy enough with the sizes to start transferring things over. But after it restarted itself and showed my icon screens again, it’s refusing to download anything now, most apps are not downloaded yet. It sat in this state for a few hours, so I decided to restart the phone – now it’s just sitting at the big startup Apple logo and won’t start. Urgh…..

I left the new phone to its own devices overnight, stuck in the bootup screen, and by morning it had indeed fully booted up.

Here’s what seemed to work – it’s non-obvious because it seems to require waiting vast amounts of time with no indication that it’s going to work.

So as I wrote in my (first) update, I disabled iCloud Photo sync. That helped a little bit, as did deleting various other random stuff, so that the phone-to-phone transfer could proceed. The new phone was still VERY unhappy because it was right up against its capacity limits, everything was super slow as it tried to perform tasks that require a little disk space elbow room.

Next, I re-enabled iCloud Photo sync on the new phone. Nothing really changed, but it started saying that it was uploading photos to iCloud (incredibly slowly). Over the course of the next couple days, it seemed to make a bit of progress uploading, until suddenly today I’m seeing a MUCH happier storage report:

I hope this can help someone encountering similar issues.