I was looking at the resume in this question, and I noticed the skills bar chart. I’ve seen this on several designers’ resumes and was wondering if it is a new fad, if it’s something that I should consider adding to my resume/website, etc. 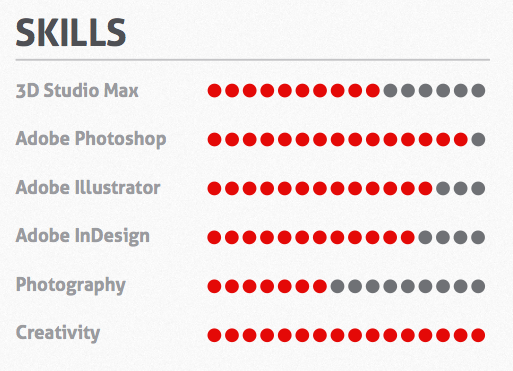 Wouldn’t this get you less clients if you forget or didn’t have the room to add every single piece of software that you know and your skill level of said software? I can understand adding fundamental software like Photoshop and Illustrator, but what about all the little programs that I don’t use very often, but I still know how to use? If I were to list all those, the resume would be like 3 pages long.

Is this a useful graphic to add?

If the information is valuable (in other words, if it makes you look good), placing it in an immediately identifiable graphic is nice. It is not mandatory though and you shouldn’t force it into a resume just because you can.

Images, graphs, charts, all foster simultaneous intake. One can look at a graph or chart and instantly understand the intent. It takes mere seconds to understand that A is bigger or more important than B.

Whereas with text, everything is interpreted in a linear fashion. You have to read the preceding words before the following words make sense. Or you read a list from top to bottom. Once you’re at the bottom you may not entirely recall what was at the top.

I, personally, don’t think that’s a great resume in your link. It’s laid out nicely, color choices are good, but there’s very little substance to it. I mean that word cloud at the bottom is just pointless. The entire goal of a resume is to get you a call back or interview. I would not be calling that designer because there’s not enough information present on the resume, nothing about that resume makes me want to know more about him or his skills. In addition, there is some fairly poor gramar – even considering English may not be his native language….. have an English speaker proof-read it. I’d never create a Yugoslavian, or French, or any other language, resume without hiring a native speaker to review it before sending it out or posting it somewhere.

As for all the little apps you may know how to use….. it’s not important to list absolutely everything you are familiar with. Simply cover what will be of primary interest to an employer… Adobe apps, Quark apps, web language/packages, etc. No one is going to care that you know how to use iTunes or Winamp.. so leave that stuff off.