In the macOS Photos app, select one or more photos and then choose > File > Export > Export 1 Photo. A popup dialog appears with options for the exported image: 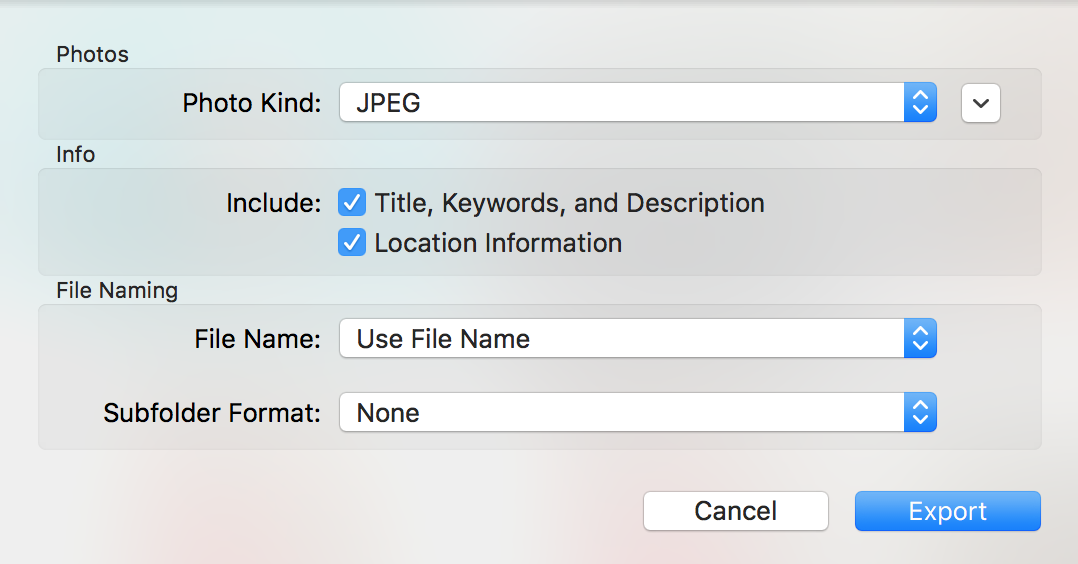 Accept the defaults then choose Export, at which time a second dialog appears asking where the images should be stored. This also applies if you use the keyboard shortcut shift-command-E.

This is a bit of a pain when exporting lots of images in a session, especially since I always take the default options on both dialogs.

Are there any options or tricks for avoiding these dialogs, or at least removing the first dialog (perhaps via a default export setting)?

As I mentioned in a comment, anytime I have something repetitive to do, I script it in one form or another, and this is how I handle your scenario.

In Automator, create a new Service workflow with the following settings:

Assign a keyboard shortcut for it, in:

Now in Photos, after having selected the file(s) to export, press ⌃⌘E and the selection is exported to the Desktop. No need to deal with multiple dialog boxes as when pressing ⇧⌘E.

Obviously this is just example AppleScript code and while thisLocation is set to the Desktop, nonetheless it can be set wherever you’d like, where the folder already exists. It just has to be in the form of an alias if not using any of the folder constant path to (folder) locations e.g.:

Also, on a side note, Automator offers a number of different actions for Photos and those along with other actions provided can make for nice solutions to some repetitive tasks.

Note: As stated, this is just example AppleScript code and can be modified as needed beyond modifying the value of thisLocation, as wanted, e.g. adding with using originals at the end of export theseItems to thisLocation, or other code as wanted. The onus is upon the User to add any error handling that may be appropriate and or necessary.