The stroke width tool in Illustrator features some really unpredictable behaviour when used on a compound path. When I change the width on one part of the compound path, Illustrator applies that width change to the other part as well. 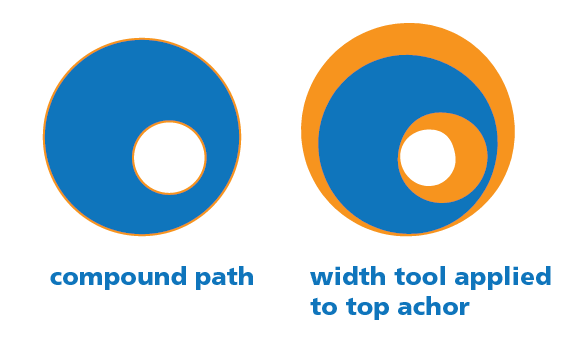 This is a compound path: a circle with a smaller circular hole in it. I need it to be a compound path to have the hole. However, in the right picture I applied the Stroke width tool to the outer path’s top anchor only, yet Illustrator goes ahead and applies the change to the inner circle as well.

Is there a way to change the widths of a compound path’s strokes independently?

The simplest solution is to use separate objects for fills and strokes. In the case of your circles sample, I’d use 3 objects. One for the fill, then two objects with just strokes on top of the fill. This would allow you to independently alter the stroked objects.

I don’t know of any other method for variable strokes on compound shapes.

Of course, you could always expand the object and then add a stroke to the (now expanded) strokes and adjust that. But that seems even more convoluted.