This is a puzzle about measuring network latency that I created. I believe the solution is that it’s impossible, but friends disagree. I’m looking for convincing explanations either way. (Though it is posed as a puzzle I think it fits on this web site because of its applicability to the design and experience of communication protocols such as in online games, not to mention NTP.)

A protocol to discover the round trip time is:

Is there a protocol to determine the one way trip delays? Can the robots discover which of them has the longer message sending delay? 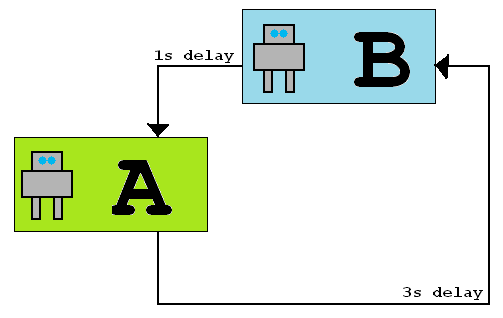 The following diagram, from a blog post I wrote, is a visual proof that it’s impossible:

More formally, you can’t solve for edge lengths when given only the lengths of the cycles. The cycle basis has $n-1$ degrees of freedom, corresponding to $n-1$ unknown clock skews relative to one of the participants. You can always hide the one-way latencies, even when there are many participants:

If you’re not so visually inclined, I have another intuitive argument. Imagine a time portal to a hundred years in the future. As you chat across it to someone on the other side, you realize the conversation is totally normal despite the hundred year asymmetry in one-way delays. Any observable effect would have been obvious on that scale!