A lot of (early) printing is done in black and red. The red is mostly used as accent color.

What is the origin of this red? Does is have a name and/or specification? 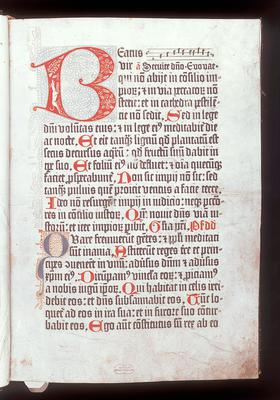 I know it’s a strong color scheme. I wan’t to know what the exact color is and the reason why early printers picked this particular color. I’m also interested in the properties of the ink. What it is made of. Also if it is always the same red.

The example I gave is by Fust and Schoeffer, printing completed in 1459. A few year earlier, Fust loaned Gutenberg money to print his bible.

I realise that these early works inspired many. I guess Gutenberg red is the reference point. But if some other publication has more influence on this ‘typographic color scheme’, than I would like to know who, what and why.

If you pinpoint a region and time period, then you probably will be better at guessing what the exact pigment was. Long time ago travelling was expensive or merely impossible, so inventions were usually created in parallel in more than one place or replicated to avoid the need of importing and exporting goods.

For example these are two medieval sources of red pigment: mercuric sulphide and vermilion, which are very similar in colour, or so I read.

You mentioned “prints” in your question, though, so are you specifically referring to documents created with a press, so circa 1400? Take a look at @Yorik’s comment below.