we can fit images of any size or orientation into a particular frame size. But we cannot specify the resample method, like Bicublic Sharper. In fact we do not know what resample method it uses.

we can control the resample methods. But for batch processing, like batch resize photos of different orientation, we cannot specify a “fit-frame” size in this menu.

Is there a way/a script/a menu that we can combine the advantages of the two – Batch Fit Image with Bicublic Sharper?

You can actually take a look at the source of the Fit Image script. It’s in \Presets\Scripts\Fit Image.jsx (at least for CS5).

In my script, the resampling method is on line 135:

So there you go, the default method is Bicubic.

According to the reference guide, we can send one of the following:

Same as the image size dialog in PS (big surprise!), with an additional NONE.

I am far from an expert at scripting in Photoshop, but I was able to modify the existing Fit Image script to incorporate a re-sampling method dropdown. This works for me in CS5, I did not test it in any other version of Photoshop. 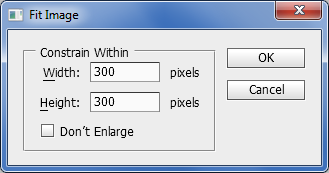 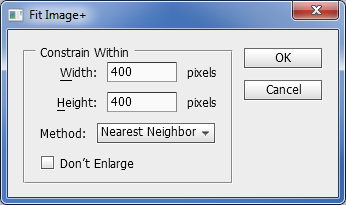 Edit: Okay, so this isn’t (yet) compatible with a recorded action, which admittedly makes it kinda worthless. I’ll have to figure out how that works. Now with recorded action functionality!