I am using Illustrator 17.1.0 to prepare some scientific figures. I have two layers: the bottom one has some placed PDF figures and the top one has annotations.

When saving this as a PDF, the placed figures simply don’t show, regardless of the PDF viewer being used (Acrobat, Mac Preview).

Why does this happen? Is this a common/known problem? Is there a solution other than embedding the placed figures?

The reason why I use placed figures is that they’re generated by a plotting software and I wanted to make it easy to update them when necessary.

Here’s a link to an example showing the problem. plot.pdf is placed and annotated_plot.pdf is saved from Illustrator with “Preserve editing capabilities”. When opened with illustrator it shows everything correctly, but when opened with any PDF viewer, it doesn’t show the placed file.

This appears to be a bug in Illustrator and happens when placing any PDF exported by Mathematica version 10. It does preserve the placed PDF file, but it sets the bounding box to be of zero width.

Possible workarounds (other than embedding), only for the case when the placed PDF uses no transparency:

(Reposting my answer from this thread.)

Setting Compatibility: Acrobat 4 (PDF 1.3) in the Save Adobe PDF dialog in Illustrator solves the issue (checked with Illustrator 17): 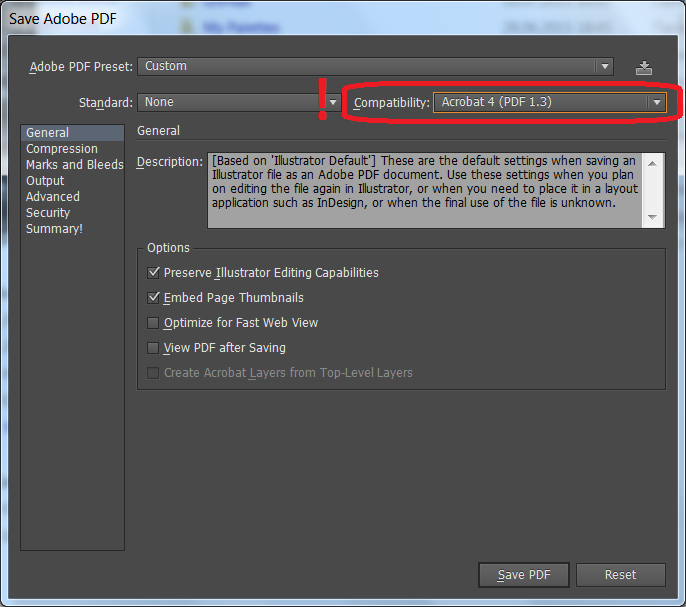 In the resulting PDF file the transparency will be flattened without rasterization.