In illustrator, you can do pressure-sensitive drawing with the Blob Brush tool (if you set Width to Pressure in the settings from double-clicking the icon). You can also fine-tune the widths of paths with the Width tool.

But you can’t use both on the same sketch. The Blob Brush makes filled areas, and the Width Tool only works on paths with strokes.

This means, when doing freehand drawing in Illustrator, you have to choose between two options:

Is there any way to get the best of both? Pressure-sensitive freehand drawing in Illustrator that can then be fine-tuned using the width tool?

I’m pretty sure there’s nothing in Illustrator CS6 that does this by default, so I’ll accept answers that:

Right now the best option I can come up with is drawing with the blob brush, then manually tracing over those lines again with the pencil tool, then using the width tool to mimic and tweak the twists and turns of the original natural freehand drawing.

It doesn’t loose initial freehand spontaneity like just using the pencil tool from the start, but it’s really inconvenient and time-consuming. I’m sure there’s got to be a better way.

Reiterating a bit of what you’ve posted in your question…..

By far the best tool I know of for Illustrator where natural drawing is concerned is DrawScribe from www.astutegraphics.com.

Edit as of Jan 2014 DrawScribe has been folded into Astute’s DynamicSketch plug in, same functionality shown here (plus more) but with a new name.

This does everything you’ve outlined, as well as remaining standard AI art. It merely provides a different method for creating that AI art.

(Of course it’s easier if you zoom in to select those finicky width points. 😉 )

I realize this is a third-party, $$$, solution. But it’s well worth it. There is a free demo I’d encourage you to try.

The WidthScribe Tools from Astute Graphics are indeed an easy way to apply width profiles to paths. They can be used in conjunction with any path that will accept Width Tool input. They allow you to essentially brush on width variations and eliminate the need to manually add and pull width points.

One additional note on the plug ins above. Its important to realize that they create standard Illustrator artwork. You don’t need to have any of the plug ins installed to open a file which was created by using them. Open a file created using the Dynamic Sketch Tool in a copy of AI without DrawScribe installed, and you’d never know what was used to create the art. This is quite different than other plug ins in this respect.

If you must stick with the standard install of AI, there really isn’t a great tool for what you are after. A very simple Art Brush set to read pressure can get close. However, the pressure read doesn’t tend to be as smooth as the Blob Brush tool. 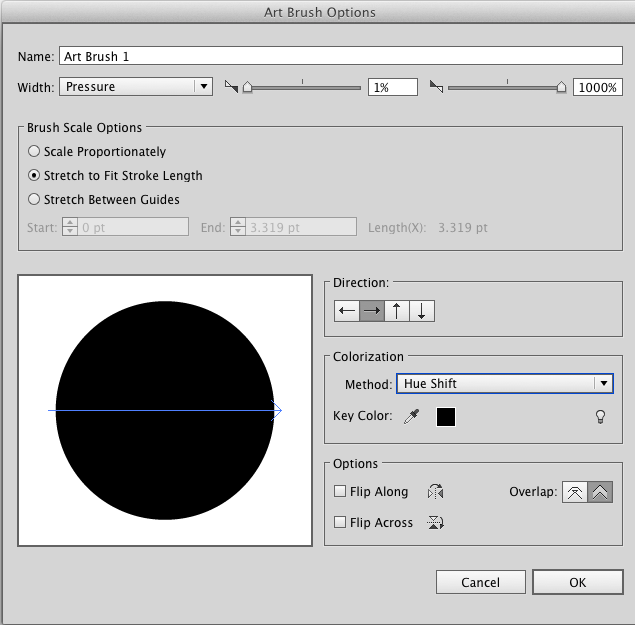