I keep seeing quite a lot of stuff like the attached screenshot:

At the moment, I usually fumble around with the pencil tool to draw a rough curve and then spend ages smoothing it before tiling it to create the circular pattern. More often than not, what I create isn’t as ‘crisp’ geometrically as it could be. 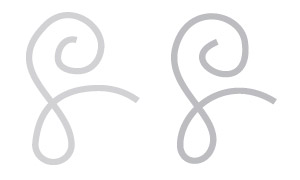 Here are two attempts. The one on the left was made by cutting up circles and creating the line joining the top spiral to the bottom ‘tear drop’ using the pen tool. The one on the right was just done with the pen tool. Both are a little bit rough around the edges and that is something I want to try and fix.

What could I do to improve my workflow and achieve a better result?

Try and use the pen (and convert anchor point) tool(s) directly for things like these. It gives you way better control over your curves. Also, if you want to draw a line segment that looks like it’s part of a circle or oval, draw that circle or oval and clip it to size with the scissors tool. Then join that curve with your existing curve and smoothen it with the curve handles.

What helped me a lot in learning patterns like these is tracing existing ones. Get yourself a pattern image, place and lock it in Illustrator and try to trace it. I also got a lot of fun and experience out of copying scans of old art books.

Another tip: after you joined two seperate line segments, remove all curvature on the joining anchor with a single click of the convert anchor point tool, and then re-click-&-drag to redraw the curvature. This way, the curvature is in exactly the same direction on both sides of the anchor, which gives for a smoother result.