I was recently watching a Lynda.Com video about color and scale in relation to typography.

At the end of the course, the instructor challenged the viewer to create a travel poster in 20 minutes using the concepts she outlined previously and the provided materials (copy, background, etc.). Simple enough.

I came up with this: 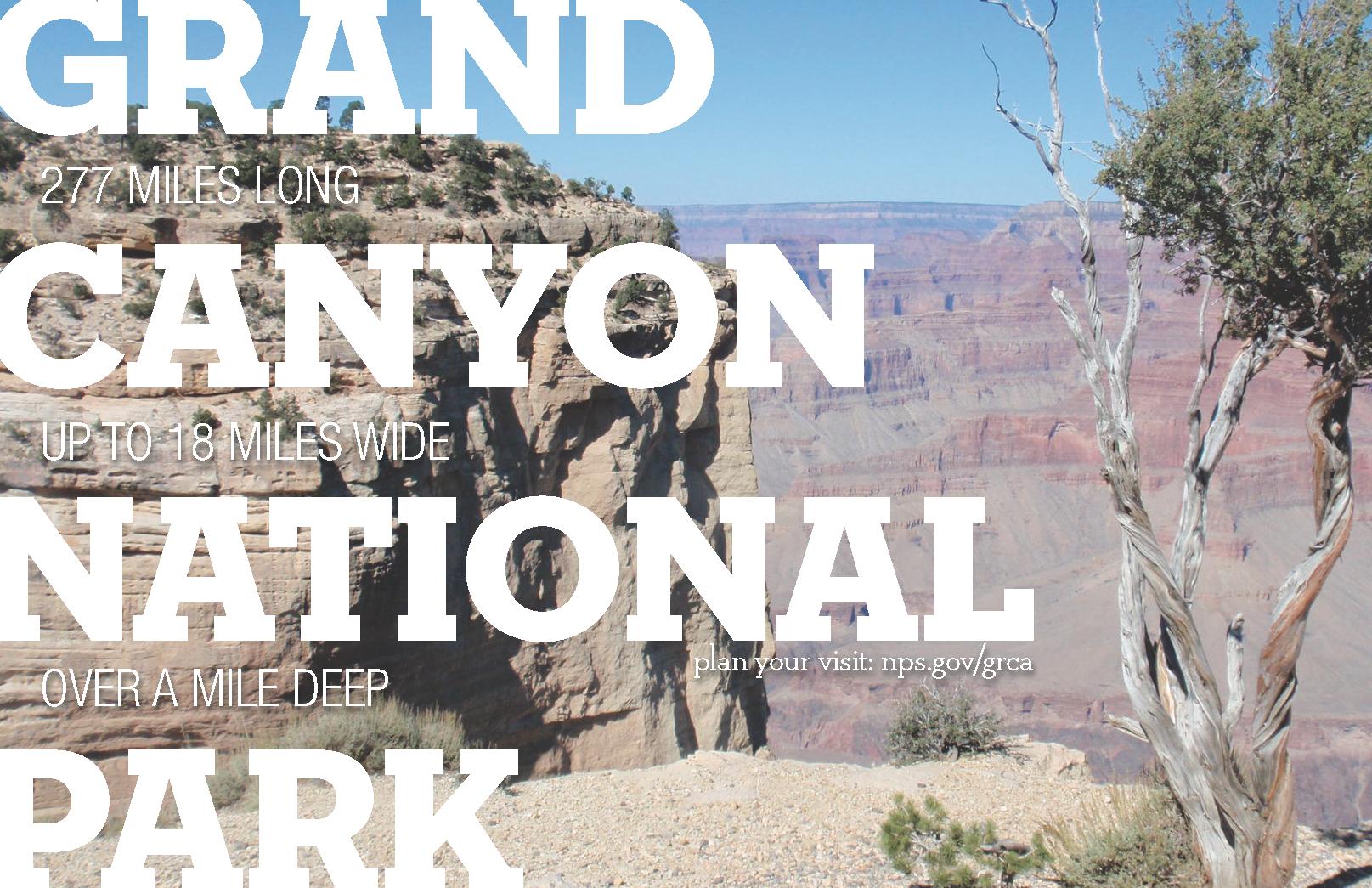 Her solution to the same problem was this: 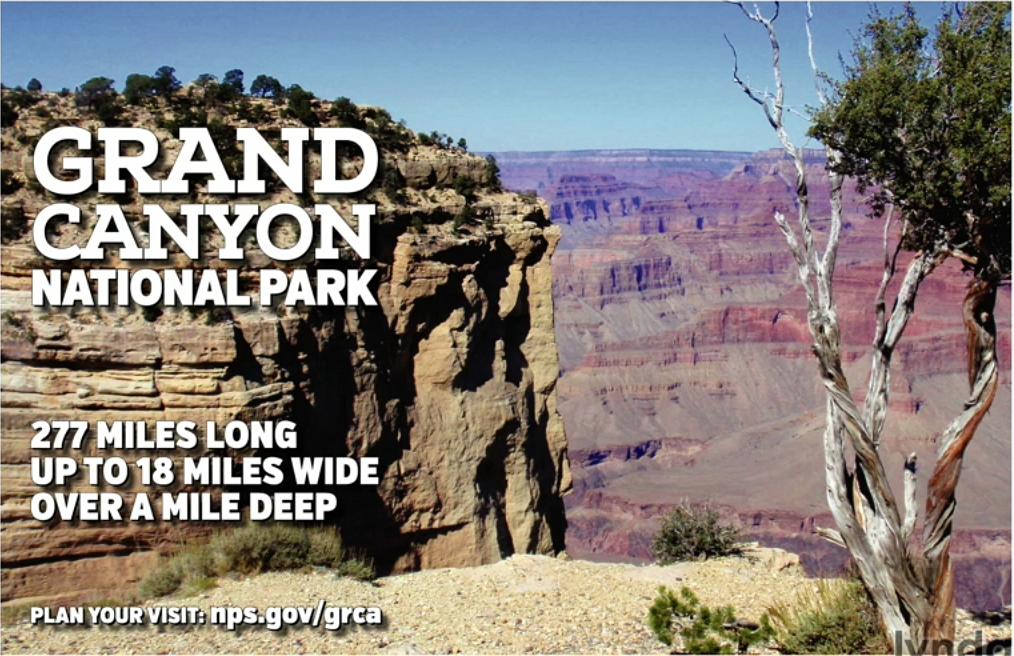 My question is, hers seems more professional and “complete” than mine. I’m having a hard time understanding why.

I chose the slab serif typeface because it reminded me of the rocks of the canyon. She chose a similar typeface as well as a chunky sans serif to match it. I chose a sans serif as well, but wanted a contrast to the slab so I chose helvetica neue condensed regular in all caps.

I wanted the Grand Canyon text to be well, grand, so I made it extend beyond the edge of the image as if there was more to see than what’s given.

The instructor chose to place the text only over the front most piece of rock wall.

I don’t understand why her choices in scale and proportion were a better choice than mine. I would think that the context would ask for HUGE lettering.

I assume the point of this exercise was to use the principle the instructor outlined in the tutorial. Not knowing what that was, I have to be very general. It was also a 20minute task, so do not take this too seriously either way. As previously mentioned, I think yours is the better poster.

Posters are often, but not always, meant to be seen at a certain distance, so there are some basics there. It all depends on the mission; what is it that you want to convey to whom. Posters are not only posters: the context where they are to be displayed is essential. I cannot stress this enough. Consider a bus shelter: people will stand relatively close to it, and reading smaller print would not be an issue: in fact, I would say small print could be an advantage. It gives people something to read while waiting for the bus. An url would also give them something to do. If it is a poster for “random” walls, this may not be a good idea. If it is a roadside billboard information must be given extremely quickly. I would then in fact consider displaying the web address prominently (and use one that is easily memorised..). Should the poster be used for multiple contexts, I would consider altering them slightly for each.

Regarding non-digital information, these days an url – and particularly a fiddly one – is not essential as such. It should be there, but people are phone-online digital enough that they very easily would find the site (providing that the person in charge of SEO has done a decent job). A more memorable url redirect would have been good, though 😀 such as visitGC.gov, grandcanyon.gov etc.

..one has to decide what element to highlight, what is the core of the message. In this case it is to get people to visit the Grand Canyon. The Grand Canyon is well known worldwide. In principle I agree with Scott, though I do not find your weaving of thin-lined font in between necessarily such a bad idea. Actually, relying mainly on the image only could in fact work. I know you where given the copy, but as a mental exercise it could be enough with “Grand Canyon”. Or maybe “Grand Canyon” in massive size, and the rest smaller. This, however, I would say again depends on the context where the poster is to be used.

The slab fonts used I associate with American college, American football paraphernalia. This might be fine of course, depending on the audience. But being aware of it might be a good idea. To a European, this feels a little overboard on the Americana side of things. It would be interesting to see what the poster could look like with an entirely different font.

The tutors poster seems to me, as @Laurem Ipsum points out, more of a flyer kind-of-thing. In addition, to me it seems dated. The visual language she uses reminds me of the time when everyone could start using dropshadows, and did go overboard with it. In addition, I would have placed all the text a tad higher: It is not necessary to show the entire sky, we get the idea. It would break up the “monotony” of the text only contained within the cliff background. A little tension in an image, contrast would not go amiss. Following the structure of a background image is to me, often some kind of laziness in composition. It restricts, removes interesting tension. To me it speaks of “not really working with the elements at hand.”

I like the fact that your text goes all the way to the edge, that it is gigantic, and that is simple (= grand canyon is something “pure”, it is nature straight up). It give a sense of something massive, something that is outside the image, something “not seen” (“there are a lot more out here!”). The white font also makes sense: it is a good contrast to the earthy, red, blue of the background. A drop shadow or outline is a possibility, but I would be very, very careful (thick outlines on these slab fonts will stress even more the American-football thing). If so, maybe try a colour other than black. I would have moved the url, though.

So, on the whole, I think yours is the better solution. Of course, all this is rather subjective. Just my two pennies.

Again, the design of a poster is entirely dependant on the context.

Here is a very crude experiment: 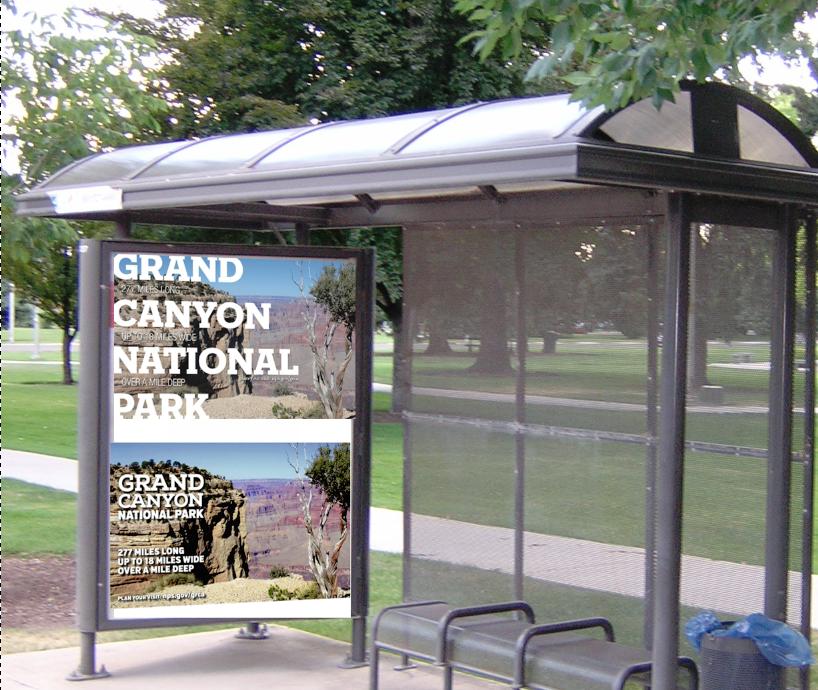