I need a way to mark the starting node in a curve. I am using the curves in an external program that animates the drawing of the object from the starting point to the end.

It appears that cutting a path at a point will move the start to that position, but combining it again will move it somewhere else.

How can I set the start point for a curve?

A curve can’t have a starting point in the middle. It has to be one or other of the end nodes. In Inskcape you can reverse the path direction using Path > Reverse. Path direction affects the entire path. You can’t have sections of a compound path running in different directions. Only open paths have a start and end node (see note below).

When you show the path direction by clicking on the path using the Nodes Tool, there are little arrows shown on the path like this example: 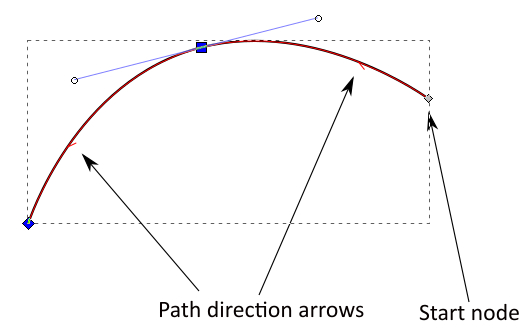 Note: A closed path has no start node as such, only a direction. There’s no way to indicate a start node in the middle of a closed path, or to have sections of path running in different directions. Path direction affects the entire path. Although there might be a way of editing the SVG XML so that a particular node comes first in the path data – but you’d need to do that manually. As far as I know, there is no way to select a node in a closed path and change it to be the first one by applying some setting in Inkscape. Perhaps there’s an extension somewhere (or someone could write one) that could do it, but I haven’t found one.