I very recently started learning how to use Adobe Illustrator (CS6), and just now I noticed something strange. When I add a 1pt stroke to my shape, it gets slightly distorted. This distortion does not disappear if I remove the stroke. (But only if I remove the stroke by setting its weight to 0. Using CTRL+Z does return the shape to its former state.)

After adding and removing the stroke a few times, the difference becomes quite noticable: 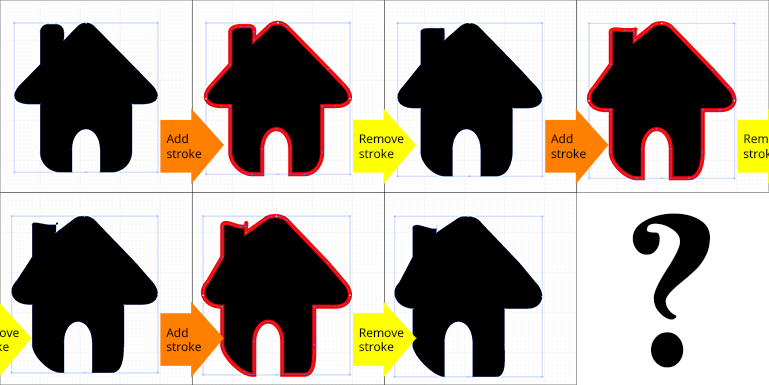 Am I doing something wrong? Is it a bug? I can’t imagine this being the expected behaviour.

EDIT: I think I figured it out. Appearantly, turning ‘Align to pixel grid’ off doesn’t affect previous shapes. If I turn it off and then recreate my shape from scratch, the problem is fixed.

However, I was wondering if their is a way to disable the effect for existing shapes. In other words, can I ‘fix’ the shapes I created while ‘Align to pixel grid’ was still on?

The control for whether or not each individual object is aligned to the pixel grid is hidden by default (in CS6, and I think in CS5 too). Why? No idea… one of those many confusing things.

In the Transform window (open it with Window > Transform), in the flyout menu (icon in top right corner), click Show options. In most panels in Adobe applications, many of the most important controls are helpfully hidden without trace like this…

That then gives you two checkboxes: 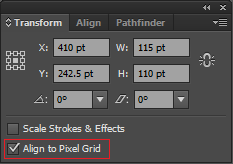 The ‘Align to pixel grid’ button controls the setting for whatever you currently have selected, and works whether or not you have Align new objects to pixel grid ticked.

I’m 90% sure that this is what Scott was referring to, and that because there was no visible Align to Pixel Grid button, you thought he meant the Align new objects to pixel grid option. Personally, I always hit ‘show options’ on everything and don’t remember what’s hidden by default and what isn’t (because why would I ever hide options? Silly Adobe…).

Select everything (cmd+A), then tick the now-unhidden Align to Pixel Grid box until it’s empty to completely cleanse your document of Align new objects to pixel grid having been ticked by default.

Personally, I don’t really trust Align to Pixel Grid except as a last resort when designed-for-web images are rendering really badly – I prefer to use the Wundes script Pixel Align which just nudges the selected objects onto the pixel grid once with no unexpected consequences.