In the following image, the top text has regular spaces around the bold word bar, whereas the bottom text includes the spaces in the bold styling: 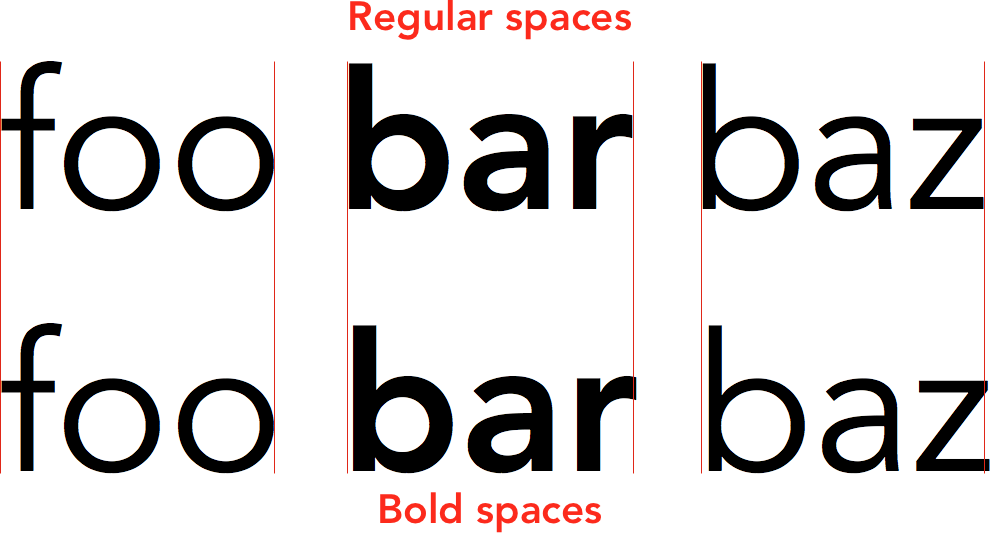 I added red vertical marker lines so it’s easier to see that the words don’t line up perfectly. For some fonts, this doesn’t seem to make a difference, however for others (like Avenir) it does matter.

Is there a general rule about which I should prefer? If I make a word bold, should I also make both the spaces around it bold?

(and if it doesn’t broaden the question too much, what about italic text instead of bold text)?

No, the spaces should not be bold because that would be bad semantics. A word or run of words can be bolded, but spaces around a word cannot.

In your example, the writer wrote:

… shown here in Markdown, but it applies in any writing environment.

… and it is after that when visual design begins.

If you for some reason wanted extra space around bolded text — and you are working in HTML as your example implies — you use CSS or JavaScript to modify the DOM, you don’t wreck the semantics of the HTML. If you are working in InDesign or Illustrator or any visual design environment, the same thing applies.

If you look at an example using actual writing it is clearer:

Danger do not eat contents of packet.

… it is the word “Danger” that has the bold emphasis. Nothing else.