I’ve noticed that many posters, advertisements, etc — as well as many fonts — use the lowercase letter “a” as shown in “figure 1”. However, I’ve always hand-written it as what it looks like in “figure 2”. Over the last few weeks, I’ve noticed that I almost never seen the second version in application. It doesn’t seem to be a serif/sans issue, as I’ve seen plenty of sans serif fonts that use a variation of the first “a”. 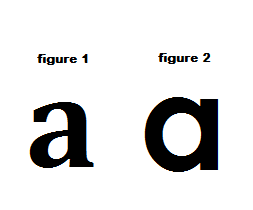 Historically, the single storey a was the italics version, as it more emulated handwriting.

But there’s no hard-and-fast rule one way or the other. Both are acceptable glyphs.