I’m a computer programmer, and I have no idea what I’m doing, nevertheless, when I founded my company, Rebus FM (“Rebus Fleet Management”), I went ahead and designed my own logo.

It’s basically a lowercase “r” with inverted hints of “F” and “M” embedded. It’s in a cloud. 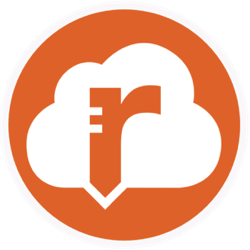 Here are my thoughts:

I am very curious to hear if anyone has any ideas on how I might improve this logo, or if anyone has feedback in relation to e.g. unintentional signals, plain bad graphic design, etc.

Overall it’s a solid, fairly well defined, image. Even at smaller sizes it holds up for the most part:

That is not necessarily a bad thing though. I merely think you may be so close to the image you see what isn’t there, or what no one else will see.

What I immediately percieved….. I see “cloud”, “r”, and the divots in the “r” appear to me to be like the end of a key indicating “security” or “lock”. My inclination would be to think it’s some sort of cloud-based software security system which is downloaded. If this does not convey the basis of the company, then it may not be the best suited logo for the company. Then again, logos don’t have to be literal at all. So some ambiguity can be fine.

If it were my design, I’d explore…

Something to maybe consider…

The “cloud” icon is exceptionally commonplace today. Using such a well known visual immediately removes a great deal of “uniqueness”.

This will cause the logo to merely blend into a viewer’s spectrum and not stand out or be prominent to any great degree.

If you deal in software which integrates with other software, then using something which indicates that more than the “cloud” may be a more unique and viable visual. The web site would indicate the market is not the “average” web user, but a more educated development environment.

Using the cloud icon, to me, is more for end-users. It’s a “sticker”, an “emoji”, a “badge”, which is seen but never really acknowledged. I wouldn’t want my logo to fall into that “user blindness” level.

This is all merely opinion. There are no rules and nothing posted in this answer should be seen as a “must do”. It’s all merely suggestion and what I would explore if a client walked in and asked me to rework this logo.