I am a web developer working at a company where the front end framework we have selected is Angular JS. I am now in the position where I am the ‘resident expert’ whatever that means. I have been tasked with teaching/explaining everything that our designers need to know about Angular JS. Therefore I have the following question:

How you receive content from designers will control what is and is not relevant.

If you receive merely static images for layout which you must then translate to HTML/CSS/JS there’s nothing you need to explain to the designers. If you control all the markup and designers aren’t creating markup, nothing changes for them. The only possible caveat is if you intend to implement some dynamic content such as sliders or special DOM animations (parallax). You may need to explain the possibilities so that designers can work on various “states” of DOM animations

If you receive HTML/CSS markup from the designers then you need to cover all Angular JS HTML requirements. After all if the markup is changing, they should be aware of new markup structures. 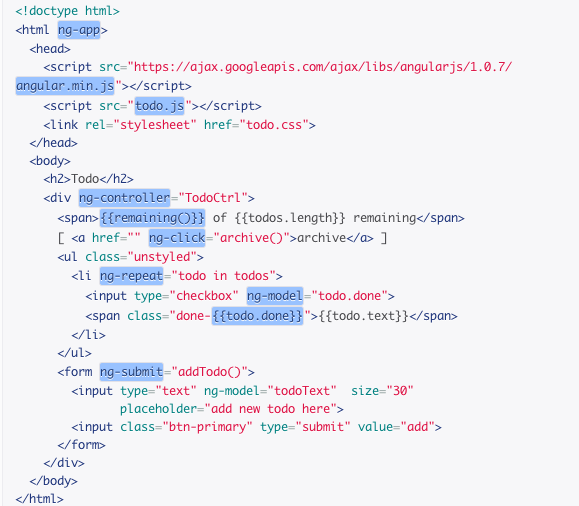 None of those highlighted attributes are standard front-end. Designers will need to learn them. In addition the double curly brace callouts {{ }} will need to be explained. Basically every single HTML element which is required for Angular JS should be explained.

Or, you could simply take control of the migration and edit everything for Angular JS needs. It really depends upon how designs are fleshed out, how much you trust the designers’ work, and how much work you want to control.