I have a transparent layer in Photoshop CS5 (so internally, it’s most probably stored as unpremultiplied RGB component plus an alpha component per pixel).

Now I want to transform this to an opaque layer (just unpremultiplied RGB) + a alpha mask. the result should look the same as the original.

I can’t just underlie the transparent layer with black, take the selection from it as a mask and merge the layers, because this would result in the alpha being premultiplied in the RGB values.

I hope you understand the problem and can give me a solution to it.

As an alternative explanation:
I want the REVERSE process of this:

IMPORTANT: the layer is just for this example fully constant red – but you could think of any arbitrary image instead of the constant red. so – to go from state A to State B, one simply has to apply the layer mask.

I want to know how to go from State B to State A.

I completely understand your pain. Here is my solution 🙂

Extract Alpha as Mask Action
Here is what it does: 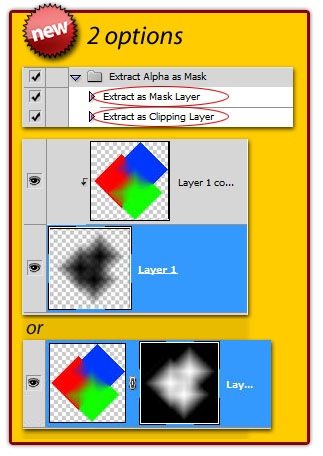 I hope this helps 🙂