I’m presently working on an iOS application and I am attempting to reverse engineer their standard alert dialog window. I have managed to figure out what the alpha value on the background it uses is through some color sampling against a solid black view, and a solid white view.

Given this information, using GIMP is it possible to just “erase” the background color, so that I am only left with the original, unblended alert background?

I only have the alert view in image form as a screenshot from a running app.

Yes, it’s possible. Let me outline how it’s done, using this image from Wikimedia Commons (by ed_g2s, licensed as CC-By-SA 3.0) as an example: 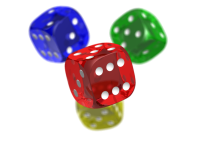 Of course, this technique really requires that you have versions of the image on pure black and pure white backgrounds. If the backgrounds are a little bit off, similar methods may still be usable, but you may need to do additional color adjustments and the results may not be as perfect. (Edit: See additions to step 2 above. The amended instructions should work with backgrounds of any color, as long as they’re solid colors.)

Ps. GIMP does also have a “Color Erase” feature (as a blend mode for the Bucket Fill tool, or as Color to Alpha… for the whole image), which is useful for reconstructing transparency when you have only one version of the image on a solid color background. However, unless used carefully, it does have a tendency to produce output that is rather more transparent than you’d probably want it to be.

Pps. If you compare the original and reconstructed images very carefully, you’ll see that they’re not exactly identical — some color values are off by 1/256 or so. That’s because of how GIMP’s “divide” layer mode works: rather than calculating the true inverse of the alpha multiplication, which would be output = (255 × input) / layer, it actually calculates output = (256 × input) / (layer + 1). This mismatch, which is ostensibly done to avoid dividing by zero, means that some of the colors may round to a slightly different value than they should. Alas, I know of no way around this, other than patching GIMP, writing a plugin to do the division the way we want it, or using some other program. Fortunately, though, the color difference is rarely if ever actually perceptible by the human eye.