I’m an ebook publisher trying to include 10 color illustrations inside an ebook. It’s not a fixed layout ebook but a reflowable ebook (i.e., an epub).

Graphic example here: http://www.flickr.com/photos/rjnagle/sets/72157641718117054/ (Sort of low resolution — but this should give you an idea about what they look like — the text refers to the story title).

I’m working with a talented artist who is good at drawing but doesn’t really know much or anything about graphic formats. She has limited experience using graphics software. Ironically although I have absolutely no artistic talent, I’m more comfortable than she is about using graphics software — especially to do a specific task. I’m pretty good at using gimp.

She has given me some images in high quality jpg formats. Possibly she could rescan the images — although I already have 300 dpi of everything. Ideally I’d like these interior images to scale on the fly and to separate the text information from the graphic itself. The software on the major tablets are starting to support svg images, and one of the problems with these 10 images is that they incorporate text and images together (They are chapter headings). I need an image which will adjust well to low resolution and high resolution devices.

I see that inkscape has tools for turning raster images into vectors (using trace bitmap for example). My aim is to create faithful images (perhaps cropping out the text and overlaying text in Inkscape). My questions:

Some more characteristics of the original artwork:

Lots of whitespace. The image rectangle will occupy about a third of the tablet page. About 2/3 of the drawing is curvy line drawings using a black pen. However, in the center there’s a half-circle containing a color sketch with a filled color background that sometimes is fairly intricate and has impressionistic brush strokes. This color sketch is trying to depict a scene
from the book.

I’m trying to figure out whether it’s worth the effort to convert the image to vector, or whether I should just leave it as a jpg and remove the text from it (which is fairly easy to do because it’s underneath the image itself and completely separate from it). Leaving them as JPGs is easier and the ebook software all supports that, but it doesn’t future-proof or scale images well –you usually have to specify a specific image dimension.

Using inkscape to convert scanned color drawings to svg — recommended
or no?

I would say, generally tracing photos or detailed, photo-like images is very very difficult to do well, so not really. But of course, there are ways…

Based on the image you provided, here is what I would attempt:

The black and white line-drawings should be simple enough to trace. I would ask to get scans of the coloured parts in as high a resolution as possible.

I would trace the black and white and the coloured parts separately. To do them together would bring too many elements and compromises.

Please note that these examples are Illustrator, and I am no expert in Inkscape. However; Inkscape should have about the same abilites.

Here is part of the image you provided: 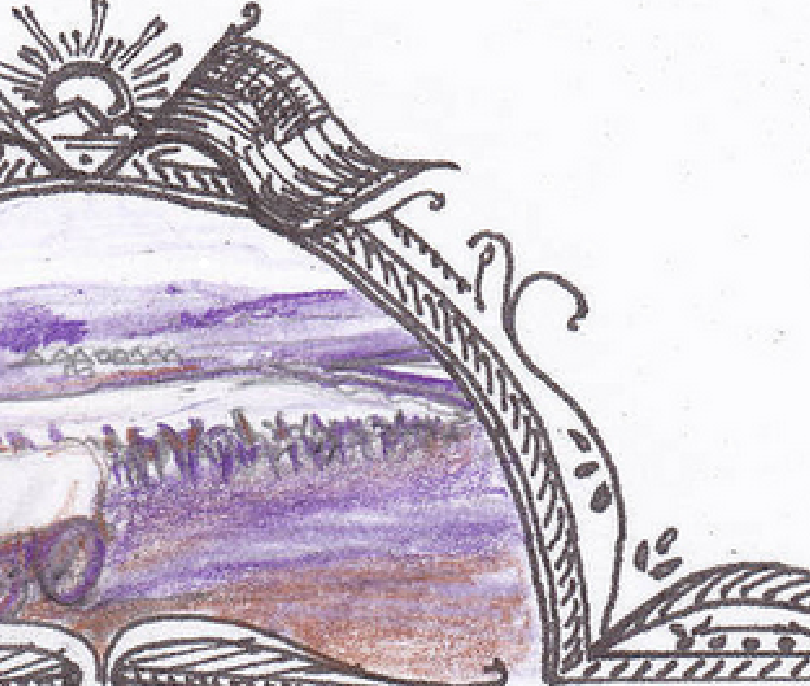 The colours are all over the place and not like the original. I would then trace the same image again, from the original, but this time only considering the coloured parts.

In the end you should have two layers, where one is optimised the black-white, and one with the optimised coloured part.

I would remove the text from the drawing, add that in Inkscape in a third layer as text.

The exact steps in Inkscape, alas, I cannot tell you; but the trace function should have alternatives for high fidelity. You will probably have to fiddle around with it, but it get much easier when you only have to focus on one element at a time (i.e. coloured vs. black-and-white).