I often adapt illustrations to fit brand guidelines.
It usually is a tedious task when I have to select each color by hand.

So I’ve been trying to make sense of the “Recolor Artwork” feature… I know how to define my brand colors in a Library or a Swatch, but I haven’t found a way to restrict the colors in an illustration to my defined swatches. I don’t have anything under under “Color groups” in the “Recolor Artwork” window. In the “Color reduction Options” I’ve tried everything, I always end up with either horrible value swaps (dark shades from my swatches to replace bright ones?), or a lot of the original colors still there. “Colorize methods” don’t seem to make a lot of sense. 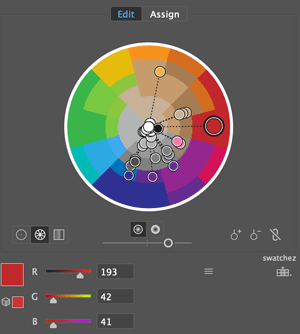 In the “Edit” tab – although the user-defined “swatchez” is selected, more than half the colors on the wheel are from the original document, not from the swatch document 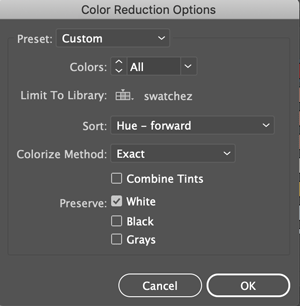 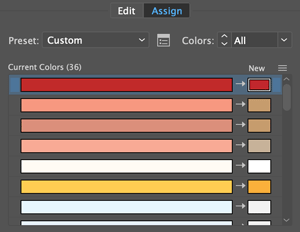 … but then the document still has 36 “Current colors” – a lot of which are from the original colors, not from the swatch. The swatch library is selected in both windows, “Recolor Artwork” and “Color Reduction Options“… 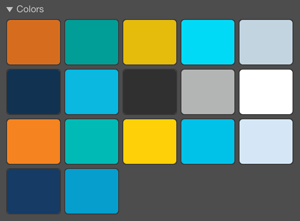 The colors in the Swatch file used 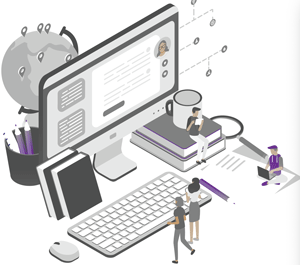 The “Recolorized” illustration. In several shades of grey and one purple.

I want to make sure that when I recolor, all the original colors of the illustration are totally gone from the “Current colors” list and replaced with the closest color from my swatch.

How do I replace the colors in a vector illustration with the closest match from a set of user-defined swatches?

I was going to suggest reviewing the help on Recolor Artwork if you haven’t – but as I searched for a link I see there’s really nothing very helpful available — shame on Adobe!

There’s no such thing as “closest match” in Recolor artwork. Illustrator and the color engine simply aren’t that smart.

For general replacement Recolor Artwork uses Color Harmony Rules. Which is that bar in the top of the window. 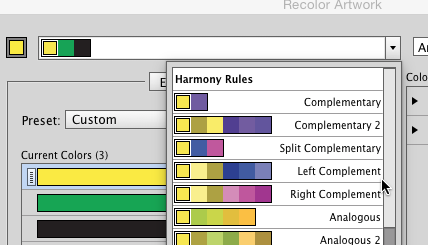 Now, is this helpful? To me – heck NO! I have no clue what the math, theory, or algorithms are when these are used. I find no real documentation anywhere and have never been able to accurately predict how changing the harmony will alter color application. But.. in theory.. this is what Adobe thinks is helpful and a way to restrict or direct how colors are replaced. If you figure it out.. please post a Q/A so I can know, because I’m clueless here. :)

What I do is count colors and swatch positions.

I create a color group with the same amount of swatches, and order them in the way I want them replaced.

So, if I want to change which color is replaced by what other color, I merely reorder the new color group swatches…

So, merely by altering the order of the swatches within the group I control color replacement in a more logical, predictable, manner.

The key thing is to create your own color groups in the Swatch Panel.

The Swatches Panel is where you can directly edit colors within a group…. and then the groups show up in the Recolor Artwork Dialog. 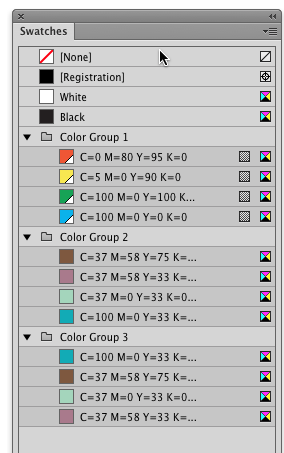 When exploring replacements, you can drag the New color boxes around in the Assign tab to change replacements. Then when you have the order you want, click the Save icon to update the color group – which essentially merely changes the order of the colors.

Also, it may be helpful to realize that black, white, and greys are considered “sacred’ colors in a way. If you want those values to change you have to tell Recolor Artwork that they can change….

Click the little “pref” icon in the center of the window…

Then in the Color Reduction Options untick Black, White, or Grey, under the Preserve area… 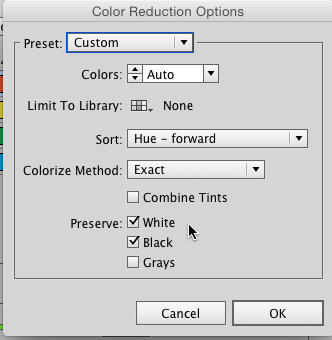 Truth be told an entire book could be written on this feature alone. Adobe’s documentation is horribly lacking. I haven’t seen the Classroom in Book area covering this, so maybe it’s better. But online or in-app, there’s hardly any direct information and most of the things I found were merely cursory and/or “one shot tutorial” type of stuff. It’s a rather in-depth feature with myriad options and settings. (CS6 screenshots, but it’s the same in newer versions, other than the window chrome)