Occasionally, you hear about a graphic that has been published, but unfortunately the designers missed a second way interpreting of it. For example, this ad that was actually published: 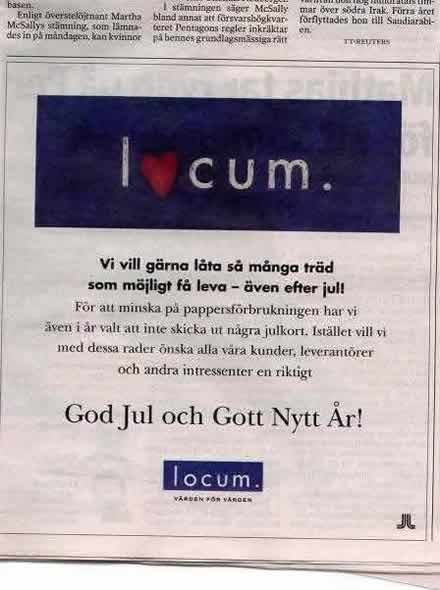 The name of this company is Locum, but for this ad they switched the ‘o’ in their logo (see the bottom of the ad) to a heart. Unfortunately, the lowercase ‘L’ of the logo could also be interpreted as an capital ‘I’. This made the logo spell out “I♥cum”. Readers of the paper noticed it and ever since this image has been wandering around the internet. While this might have given some free publicity to the company, this is of course something you would want to avoid. So my question is

What can be done to avoid this happening to one of your own designs?

Of course one of the most important and easy things to do is to get input from someone else. But apart from that, what can be done? Are there strategies or best-practices that help prevent something like this?

I also was pointed towards this question about how designers should react when a second meaning is pointed out to them. I feel this is a different question, because I’m specifically asking how you can avoid such meetings with the client in the first place.

The actual motive for this question

The misinterpretation I described happened to me when I wanted to switch back to this site from a different tab:

The graphic reminded me of the female reproduction organ. Now I can’t unsee it. I’m so sorry.

For translated languages, you need a native speaker. However, since your ad example is not an English language ad, there would be no reason to believe it would read in English*. It may be perfectly innocuous in the native tongue. I’m sure I’ve created things that are unintentionally horrifically offensive in other languages.

*Although English is common enough, So I suspect that ad “error” was actually intentional. Which DOES happen. I once received a mail catalog from a very well known name brand department store with a well known offensive 4-letter word, which starts with “F”, sprawled across the back cover. It was part of the print, not added later – as if a pressman used his finger on the plates to add it. Disgruntled workers will do that at times.